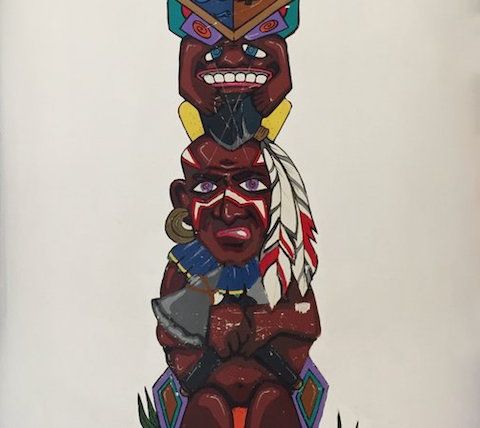 Above: One of many depictions of the Onteora Indian at Onteora Central School. Photo via the Onteora Humans Rights Club.

At a meeting on Tuesday, June 7, the Onteora Central School District Board of Education voted 5 to 2 to change the school’s mascot from the Onteora Indians to the Onteora Eagles.

This isn’t the first time the school district, which stretches across Ulster County from Pine Hill to Hurley, has tried to change its mascot, which many students consider offensive and racist.

In 2000, an attempt by some parents and board members to replace the Indian became a bitter culture war complete with death threats, vandalized tires and national media attention in outlets like the New York Times.

The Board of Education voted in favor of the mascot’s removal. But the controversy erupted in the middle of a school board election, and soon a new board reinstated the Indian mascot. It has graced walls and hallways around Onteora’s campus ever since.

Left: Another version of the Onteora Indian. Photo via the Onteora Middle School website.

Last night’s vote to replace the mascot came as a surprise to many, including Jack Warren, a senior at Onteora High School and the vice president of Onteora’s Human Rights Club, which has been campaigning to remove the mascot for most of the 2015-2016 school year.

“We were surprised. Pleasantly surprised,” he said. “There are plenty of people who are upset, and they have every right to be; the mascot meant a lot to them. But it was time for it go to. But that doesn’t mean they shouldn’t mourn the loss of it.”

The topic of changing the mascot has been a recurring topic of discussion by the Board of Education for months. Last November, the Human Rights Club launched a petition on Change.org calling for the removal of the Indian as the school’s mascot. By mid-December, the petition had been signed by 712 people.

A counter petition asking to “Keep the Mascot” gathered a similar number of signatures around the same time before it was removed from its host, MoveOn.org, according to the Woodstock Times.

In February and March, Onteora’s Human Rights club and its student government hosted four student forums on the topic of changing the Indian mascot, Warren said. At all of the gatherings, students spoke on both sides of the issue, he said, but consistently a majority appeared to favor changing the mascot.

In April, Raegan Loheide, the Student Government President, told the Board of Education that the student government was polling students on whether they wanted to change the mascot, according to the Daily Freeman.

In May, Loheide told the BOE that it was hosting a mascot contest for students to vote on a replacement for the Indian, the Woodstock Times reported.

Student government representatives whittled the field down to four finalists—black bear, mountain lion, thunder and eagle—and then posted a poll in early June on the upper school’s internal campus web portal for students to vote on a winner, Warren said.

Of the 600 students eligible to vote, 107 voted, Warren said. The eagle was the winner.

The student government then submitted a formal proposal to change the mascot to the Board of Education, Warren said.

On Tuesday night, the BOE considered the student government’s proposal, and then opened up the meeting to public comment. Warren and several other people spoke in favor of changing the mascot, he said, while only one person, former board member Cindy O'Connor, spoke in favor of keeping the Indian.

“That’s the only person I’ve ever seen at a school board meeting speak in the defense of [the mascot],” Warren said.

After the public comment period, the seven BOE members voted on the measure. It passed, with five board members approving it and two opposing it. Those who voted to change the mascot were Bobbi Schnell, Rob Kurnit, Laurie Osmond, Kevin Salem and Bennet Ratcliff, while those who opposed the measure were Valerie Storey and Dale Allison, according to records of the meeting provided by the district clerk.

In the wake of the vote, Warren said that there are strong feelings among the students, but the controversy isn't as fierce and divisive as it was in 2000.

“There were a lot of people who were upset,” he said. “But the atmosphere was never as it had been described to us in the past.”

Nearby, however, another group of students busily created Onteora Eagles shirts.

“They shared materials,” Warren said. “They were very peaceable with each other.”

Warren, whose final day of school is on Monday, is hopeful that the peaceful feeling will only grow now that the fate of the Indian mascot has been decided.

“Once people get distance from this, they’ll see that it’s not quite as big of a deal as they’re making it out to be,” he said. “Our community will continue to be the same thing once the Indian is gone. In fact, I think we’re going to even be stronger. There’s not going to be this weird divide that nobody really talks about. ”

Editor’s note: Jack Warren is the son of Robert Burke Warren, a freelancer who writes for the Watershed Post.