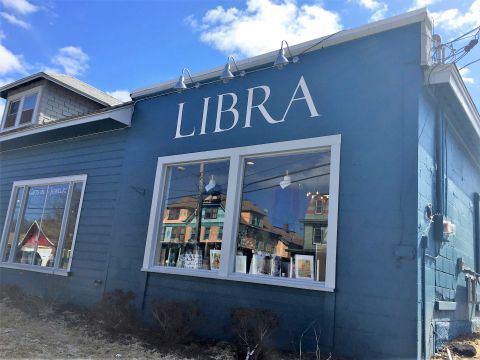 Above: LIBRA, a new store on Main Street in Tannersville, was formerly a boutique in Brooklyn. Photo by Jessica Porter.

LIBRA, a women’s clothing and gift shop, opened in August 2015 on Main Street in Tannersville, featuring affordable and eco-conscious products made by local artists and designers and fair trade products from around the world.

Jennifer Parsons, LIBRA’s owner, is a retail veteran who ran a similar shop called Sweet Charity in Brooklyn for over a decade. Last year, after her husband started working a summer job near Windham, his hometown, she decided to open LIBRA in Tannersville.

As with many Tannersville businesses, Parsons opened her Main Street shop with the help of the Hunter Foundation, a nonprofit that works to restore historical buildings in the village.

(The Hunter Foundation had a hand in kick-starting Mama’s Boy Burgers and the Hudson-Chatham Winery, two other new businesses that opened last year in Tannersville.)

When the Foundation was looking for a tenant to occupy an empty shop at 5991 Main Street, Parsons decided that her experience and goals for the store were a perfect fit.

LIBRA’s products include women’s clothing and jewelry, organic beauty products, candles, diffusers, stationary, cards and wrapping supplies, as well as gifts for babies and children. The store has a robust online presence as well.

Above: A display at LIBRA. Photo by Jessica Porter.

Parsons recognized the need to support local and fair trade artists years ago when operating the shop in Brooklyn, she said. She began seeing more manufacturers moving overseas and knew she needed to focus on supporting the makers of fair trade products.

“I was depressed to see so much manufacturing moving to China, where quality and protection of human rights were not guaranteed. So we sought out domestic and international fair trade artisans whose mission was to protect human rights and the environment,” Parsons said.

Above: LIBRA specializes in women's clothing, and will soon feature its own line. Photo by Jessica Porter.

Though the first few months have been difficult due to a lack of snow and less winter tourism than usual, Parsons expects business to pick up during the summer, she said.

Currently, the store is open Friday to Sunday and some Mondays, but Parsons plans on increasing LIBRA’s store hours during the summer season.

Parsons also expects to continue adding new products to the shop as well as offering LIBRA’s own line of clothing later this year.