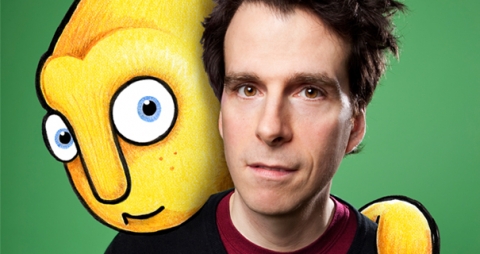 Since arriving on Earth from the sun, Gustafer Yellowgold has lived by a Minnesota lake. He has a pet eel and a pet dragon, and his best friend is a pterodactyl named Forrest Applecrumbie. Grammy-nominated and award-winning, Gustafer Yellowgold and his creator Taylor Morgan will bring their multi-media, family-friendly performance to the Roxbury Arts Center on Saturday, November 12 at 2:00 pm. For tickets and more information call 607.326.7908 or visit roxburyartsgroup.org.

Since his creation by Morgan Taylor in 2005, Gustafer Yellowgold has become an international phenomenon, acclaimed by The New York Times which described Gustafer as “A cross between ‘Yellow Submarine’ and Dr. Seuss.” Entertainment Weekly praised “…The most infectious original songs. It’s like tapping into some pleasure center in the brain- both adult and kid…absurdly appealing.”

Gustafer Yellowgold’s show is a multi-media performance of live music, colored-pencil animations and storytelling. With its unique crossover appeal, the show has been the wild-card opening act for Wilco and The Polyphonic Spree. Gustafer has appeared off-Broadway in his own productions of Gustafer Yellowgold’s Mellow Sensation and Gustafer Yellowgold’s Infinity Sock. Gustafer the character is a friendly creature that came to Earth from the sun and is living out an explorer’s life in a slightly psychedelic version of the Minnesota woods.

“There is something that is extremely appealing about music and artwork that is created for children” says Jenny Rosenzweig, Executive Director of the Roxbury Arts Group. “It allows the artist or performer to break through barriers because the only limits to this type of creation is the depth of one’s imagination. I’ll be there for sure with my little guy!”

A native of Dayton, Ohio, Morgan Taylor moved to New York City in 1999, honing his songwriting skills while concurrently becoming a successful sound engineer. A self-taught cartoonist raised on MAD Magazine and Marvel comics, Taylor began drawing what would become the Gustafer Yellowgold animations as a picture book project in winter 2004, during breaks of touring as the multi-instrumentalist for Autumn Defense, featuring WILCO’s John Stirratt and Pat Sansone. Taylor played the first live Gustafer Yellowgold concert with music and moving images in the summer of 2005 while on tour in Seoul, Korea. His DVD/CD sets, Gustafer Yellowgold’s Have You Never Been Yellow? and Gustafer Yellowgold’s Wide Wild World, are National Parenting Product Gold Award winners and were honored by the Kids First! Film and Video Festival.

Don’t miss it when Gustafer Yellowgold’s intergalactic travels bring him to Roxbury NY for a special performance at the Roxbury Arts Center on Saturday, November 12 at 2:00 pm. For tickets and more information, call 607.326.7908 or visit roxburyartsgroup.org.

All programs offered by the Roxbury Arts Group in 2016 are supported by the A. Lindsay and Olive B. O’Connor Foundation, the Robinson-Broadhurst Foundation, the New York State Council on the Arts with the support of Gov. Andrew Cuomo and the NYS Legislature, Robert & Nellie Gipson, 2016 Season Sponsor WIOX Community Radio 91.3 FM, and the generosity of our business sponsors and individual donors like you.