Drinking and reading: Catskills authors to gather at book festival in distillery 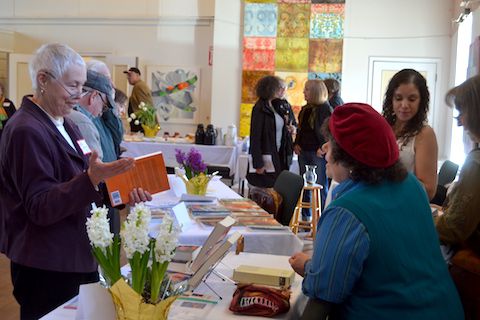 Above: The 2015 Catskills Book Festival. Photo via Writers in the Mountains.

This Sunday, local writers, illustrators, editors, educators, booksellers, publishers and journalists will gather at the Union Grove Distillery in the Delaware County hamlet of Arkville to swap stories and quaff local vodka during the Meet the Authors Catskills Book Festival.

The festival, which is being hosted by the Roxbury-based Writers in the Mountains for the third year in a row, showcases writers who hail from the Catskills, the Hudson Valley and New York City. It joins the Woodstock Writers Festival, held earlier this month, as part of the growing Catskills literary scene.

Some of the featured authors are Danniel Schoonebeek, a poet who runs the Hatchet Job reading series in Brooklyn and edits the PEN Poetry Series; Sari Botton, the editor of the award-winning anthology “Goodbye to All That;” Robert Burke Warren, the author of a new novel “Perfectly Broken;” Linda Lowen, the author of cancer anthology “Hopeful, Grateful, Strong;” plus Ginnah Howard, John Gregg, Susan Wilbur, Craig Sanders, Jo Salas, Nava Atlas and Mary Lou Harris.

“We started the book festival started in 2014 because there are so many writers in the Catskills and we wanted to create a platform for them,” said WIM Board President Simona David. “There are so many hidden personalities in the area.”

Rosie Schaap, the author of the “Drink” column for The New York Times Magazine and the memoir "Drinking with Men," is the guest of honor. Her experience in the beverage industry is fitting for the event, which is being held in the distillery for the first time this year. (Previously, the event was held at the Roxbury Arts Center, down the road in Roxbury.) Union Grove Distillery opened in February and makes Vly Creek Vodka from Catskills apples and wheat.

April is National Poetry Month, and to celebrate the festival will kick off with a poetry reading led by poet Sharon Israel featuring poet Danniel Schoonebeek.

Next will be a discussion about trends and news in the publishing industry that will feature Leslie T. Sharpe, who was an editor at Farrar, Straus and Giroux; Anique Taylor, a painter and educator; Lillian Browne, the editor of the Walton Reporter, and Simona David, the festival organizer. Their combined knowledge includes expertise in traditional and independent publishing, as well as publishing in literary journals, news media and travel magazines.

Finally, cookbook author Carrie Bradley Neves will discuss the cookbook scene in an era when foodies reign supreme. Attendees at the festival will be able to shop for books directly from their authors, vote in the "Best Cover" contest and enter the "Bounty of the Books" raffle for a chance to win a collection of 10 books.