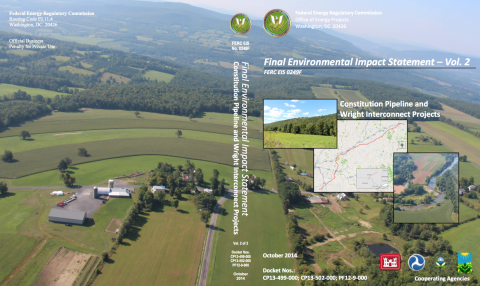 Above: The cover of a federal impact statement for the proposed Constitution Pipeline.

Opponents of a proposed natural gas pipeline are cheering the news that its opening will be delayed at least into next year.

Constitution Pipeline Company LLC announced on Thursday, March 10 that it is updating its “in-service date projection” from the fourth quarter of 2016 to the second half of 2017 in response to a March 31 deadline for felling trees.

While clearing of trees has nearly been completed in neighboring Pennsylvania, Constitution has been unable to begin such operations in New York because the New York State Department of Environmental Conservation (DEC) has not issued a permit required under Section 401 of the federal Clean Water Act. New York's lack of action has also delayed a second permit, which must be issued by the U.S. Army Corps of Engineers.

Chris Stockton, a spokesman for Constitution, said that construction could begin as early as this summer in Pennsylvania, but admitted that major construction can't begin in New York until after Oct. 1. He said there are “certain areas” in New York where preparatory work can begin sooner.

Under law, the DEC must act on the water quality certificate by April 29–a year after Constitution applied for it.

Stockton said he expects the DEC to issue the certificate. “We have been working with the state of New York for three years, now,” he said. “We feel confident that we've addressed any concerns the DEC may have.”

When asked if New York's delays have caused frustration for the company, Stockton said, “It's all regulatory. We understand that they have to take a hard look at this.”

Nonetheless, he said, “We're ready to get going. We're doing everything we can to be ready to go as soon as we get that permit.”

Anne Marie Garti, an attorney for the pipeline opposition group Stop the Pipeline, called the delay “a huge victory.”

She said that Constitution had asked the Federal Energy Regulatory Commission (FERC) to grant permission to cut trees without DEC approval, but that FERC refused. “We always said New York state has to make its decision before FERC,” she said. “This proves we were right.”

Garti said she still hopes to stop the project entirely.

“We still have to convince the DEC to deny the 401 water quality certificate,” she said. She said she expects the DEC to either grant the permit with conditions or deny it, outright, by the April deadline.

Don Hebbard of Franklin, a neighbor of the pipeline route and leader of pipeline opponents in that area, echoed Garti's comments.

“I am delighted to hear this newest update,” he said. “The very fact that we delayed them for a year shows we are making a difference,” he said.

If the Constitution pipeline is stopped, he said, “we have a good chance” of stopping the Northeast Energy Direct (NED) pipeline–a line that is proposed to run roughly parallel to Constitution, with a compressor station in Franklin.

Hebbard said that he was concerned that work could begin in New York nonetheless, in areas that do not require crossing streams or clearing trees.

The Constitution Pipeline project is a partnership of Williams, an energy infrastructure company, Cabot Oil & Gas, Piedmont Natural Gas and WGL Holdings. The 124-mile pipeline would carry natural gas from wells in Susquehanna County, Pa., to existing pipelines in Schoharie County. The pipeline route crosses Broome, Chenango and Delaware counties along the way.