Crowd gathers in Franklin as pipeline unveils plans for compressor 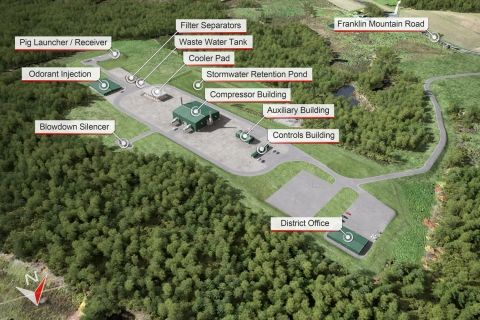 Above: A pair of compressors are part of a complex that is included in the proposal for the Northeast Energy Direct pipeline, as seen in this artist's rendering. The complex would straddle the line between the Delaware County town of Franklin and the Otsego County town of Otego.

With approval of the proposed Constitution Pipeline possibly imminent, Franklin residents got information on Wednesday, Dec. 16 about a second natural gas pipeline that may pass through their town.

Kinder Morgan, a gas infrastructure company, held a public meeting at Franklin Central School about the Northeast Energy Direct (NED) pipeline. A large crowd, including both supporters and opponents, attended the gathering, overseen by several officers of the New York State Police and the Delaware County Sheriff's Office.

A group of about 20 Kinder Morgan employees, experts in various aspects of the project, talked with residents, aided by charts, maps and a video.

Photo caption: Employees of the Kinder Morgan company talk to Franklin residents about the proposed pipeline on Wednesday, Dec. 16. Photo by Robert Cairns.

Allen Fore, Kinder Morgan's vice president for public affairs, said that the presentation was part of a series of public meetings and open houses held to talk to residents about the project.

Kinder Morgan also met with families in Schoharie County on Tuesday, Dec. 15. The Daily Star reports that one Schoharie County family will have two pipelines criss-crossing their property if both the Constitution and NED pipelines are built.

While Kinder Morgan has filed a permit application with the Federal Energy Regulatory Commission (FERC), the presentation was not part of the regulatory process. Public hearings will be held as part of that process, Fore said. He said the format, where experts engage residents without time constraints, “is really helpful.”

Fore said that artist's renderings of the project were provided to show residents what the compressor facility would look like, and that drawings were superimposed on a map to give people an idea of its size.

“The engines are in sound-insulated buildings,” he said. Fore said that there will be tree buffers surrounding the facility to shield it from view, and said the entire thing will be unobtrusive.

“What we've found is, on our existing system over the years, development has come right up to the station, much as it has come up to our right-of-way on the pipeline,” he said.

Fore said that Kinder Morgan applied for FERC approval on Nov. 20 and that FERC has already requested more information.

He said that FERC will conduct an environmental review next year and that a draft environmental impact statement will be subject to public comment before approval. The project will also also be subject to a review by the New York State Department of Environmental Conservation (DEC) for water and and quality impacts, he said.

“Our preference is to begin some construction activity in 2017 and be in service at the end of 2018,” he said.

Fore acknowledged the concerns of opponents to the project.

“We understand that there are a lot of questions,” he said. “That's why we're committed to engaging in dialogue on the specifics of the project and how, precisely, this is going to impact the area.”

He said that public input has already had an impact on the project. “We've spent a lot of time over the last year-and-a-half modifying and adjusting our project in size and scope,” he said.

Fore noted that the original proposal had been for a 36-inch diameter pipe, but that the size has been reduced to 30 inches.

He said that opponents had stated that the large pipe was proposed because the pipeline was meant to deliver gas for export to other countries, but that the smaller pipe will be used and “nothing's going overseas.”

“What it's important for people to understand is that we do respond and we do understand their concerns. We want to address those concerns,” he said.

He also said that Franklin will gain “a couple million dollars” each year in tax revenue from the project.

He said that Kinder Morgan has operated pipelines and compressor stations in New York for over 60 years, “safely and in very good cooperation and coordination with the towns.”

Don Hebbard, a pipeline opponent and a leader of the Compressor Free Franklin group, said that the meeting, which featured Kinder Morgan employees talking to residents individually or in small groups, “is just not conducive to really getting information.”

Photo caption: A rendering of the Franklin compressor station, superimposed on a map, shows the proximity of the station to Franklin Mountain Road and Interstate 88.

Hebbard said that he would rather hear a single presentation with a question-and-answer session afterward. “That way, everybody hears the same story,” he said.

Hebbard noted that the five buildings at the compressor site would cover almost an acre of ground.

“It's huge. It's an industrial complex,” he said. “It's not a small compressor station.”

Hebbard said that the addition of an “odorizing” facility, where the familiar “rotten egg” smell is added to the gas to aid in detection of leaks, “frustrates me” because, if the odorizing chemical were to leak, it would flow into the inhabited valley below.

“It's another bad boy, right up the road,” he said.

Hebbard said that the key to fighting the proposed NED line is to stop the Constitution Pipeline, which has been hanging in regulatory limbo in New York state for months awaiting a final sign-off from the DEC.

“If we can stop Constitution, then we maintain the greenfield status and we can essentially stop this one,” he said. “If Constitution goes through, then the greenfield [status] is gone and they can co-locate because there's no battles left to fight. All the permits, all the arguments, have been answered.”

"We need to keep our minds open and listen to people"

Franklin Town Supervisor Jeff Taggart said that he was happy to have gained information about the proposed compressors and the planned “odorizing” facility.

Taggart said that the pipeline would carry 1.2 billion cubic feet of gas per day, and that the proposal includes two small compressors—a 30,000-horsepower compressor and a 25,000 compressor—instead of one large one.

He said that the number of trucks needed to deliver odorizing chemicals to the Franklin facility was far smaller than expected.

“The truck traffic to the compressor station would be four loads a year,” he said. “That's not what we were anticipating.”

While Taggart said he was not “totally sold” on the compressor station, he said that transporting gas through a pipeline is safer than trucking it over roads. He compared the volume of gas in the proposed line to that of liquefied gas, saying that one million cubic feet of gas, a small fraction of the pipeline's volume, equals 12,000 gallons of liquefied gas.

“How many tractor-trailer loads is that?” he asked. “A bomb on the road, that's what I call it.” He said that trucking the gas also “puts a lot of wear and tear on the roads” and causes emissions from diesel trucks.

“I think their major concern is emissions, and that's my major concern,” he said. “Some people say it's death tomorrow and some people have lived next to one for 30 years and they haven't had health issues. It's got to be looked into.” Taggart said that he had visited compressor stations in Hancock and in Wellsboro, Pennsylvania and was not concerned about noise or vibration after witnessing compressors in action.

Taggart said that a factory in the Delhi hamlet of Fraser is bringing in a trailer load of liquid gas each day and thereby is $500,000 per year on energy costs.

“The numbers, I think, are very interesting,” he said. “We need to keep our minds open and listen to people.”

Approximately 20 opponents of the project disrupted the presentation by singing a song and presenting a skit, but they were not interrupted until one of them began yelling.

A police officer asked the man to lower his voice and the protest continued, with participants lying briefly on the floor.

With 121 eminent domain cases filed, another round of hearings for Constitution Pipeline