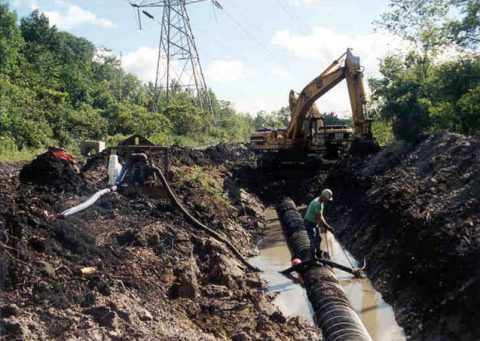 Above: A natural gas pipeline being constructed. Photo courtesy of the Federal Energy Regulatory Commission.

FERC's certificate of public convenience and necessity gives the Constitution Pipeline the power of eminent domain, which allows it to force landowners along the route to accept the pipeline's path through their property.

The pipeline's new powers are setting it up for a fight in the Catskills. Over half of the landowners along the route haven't agreed to allow the pipeline across their land. If they continue to resist, the pipeline can take them to court.

Construction can begin as soon as the New York Department of Environmental Conservation (DEC) and the U.S. Army Corps of Engineers issue permits for the project, which could happen early in 2015.

According to its backers, a group of energy companies that includes Williams, Cabot Oil & Gas, Piedmont Natural Gas, and WGL Holdings, the Constitution Pipeline will create a large number of temporary construction jobs, a dozen full-time jobs after it is built, and millions of dollars in tax revenue for the counties it passes through,

It will also bring natural gas hookups to some communities and businesses in the Catskills, including Amphenol, the county's largest employer.

Eminent domain: "Ultimately, it's going to go to court"

Since first proposing the pipeline in 2012, Constitution Pipeline officials have signed easement agreements with over 50 percent of the landowners along the route.

Chris Stockton, a spokesman for the company, said that the pipeline is in dialogue with the "vast majority" of the rest of the landowners along the route. In other pipeline projects, Williams has used eminent domain powers to force easements on about 5 percent of property owners, he said.

"Now that we have the FERC order, we'll go back and make an attempt to sit down with them and reach an agreement," Stockton said. "If we can't reach an agreement with them, then ultimately it's going to go to court. That's something that we're going to try to avoid."

The pipeline will compensate any landowner forced to accept an easement in an eminent domain proceeding.

"There's going to be a lot of people forced into court," said Robert Nied, a member of the board of the Center for Sustainable Rural Communities in Schoharie County, which opposes the pipeline. He said that it's unusual for a pipeline project to have only half of the landowners along its route signed up at this stage of a project.

"The grassroots are building unprecedented landowner resistance in this case," Nied said. "Somewhere between 40 or 50 percent of the landowners have refused to sign easements."

The eminent domain power is one of the many controversial aspects of the pipeline project, which has been opposed by private individuals as well as groups like the Sierra Club, Catskill Mountainkeeper, the Delaware-Otsego Audubon Society, the Delaware Riverkeeper Network and Stop the Pipeline. They argue that the pipeline will reduce home values, raise homeowners insurance, increase truck traffic on rural roads and harm the environment.

In its Dec. 2 order, the four FERC commissioners noted that they have received over 800 comments about the proposed pipeline, and that Constitution officials had changed about half of its proposed route in an attempt to respond to complaints.

"[We] find that the projects, if constructed and operated as described in the final [environmental impact statement], are environmentally acceptable actions," they wrote.

The public benefits that the Constitution Pipeline will provide "outweigh any adverse effects on existing shippers, other pipelines and their captive customers, and on landowners and surrounding communities," the commissioners added.

The pipeline plans to break ground on the project early in 2015, Stockton said.

But there are several more hurdles to clear before construction can begin. The DEC is expected to hold public hearings on the Constitution Pipeline in early 2015 before issuing any permit, and the chronically understaffed agency could take months to analyze the comments.