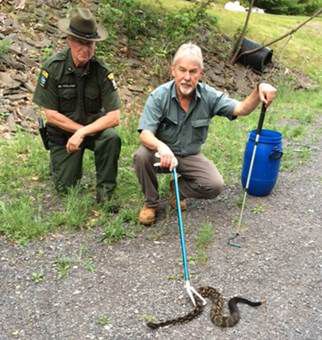 An environmental conservation officer and a snake wrangler were called in to remove a rattlesnake from the yard of a home in the Ulster County hamlet of Mount Tremper on Friday, July 1, according to a press release from the New York State Department of Environmental Conservation.

The snake was a three-foot-long Eastern Timber rattlesnake, a species that is listed as threatened in New York State. Hikers in Ulster County know to be mindful of encountering rattlesnakes on trails in the Catskills, but reports of rattlesnakes turning up at private homes are rare.

The Mount Tremper homeowner who discovered the rattlesnake called for help around 7 p.m. Friday, July 1, according to the press release. Environmental Conservation Officer Myles Schillinger responded to the call and contacted Nuisance Wildlife Agent Roy Lane, who is an expert snake wrangler.

Lane located the snake, captured it and transported it to state land several miles away, according to the press statement.

"The homeowner was thankful for the removal of the Eastern Timber rattlesnake and the rapid response of Officer Schillinger and snake wrangler Roy Lane," the DEC statement said.