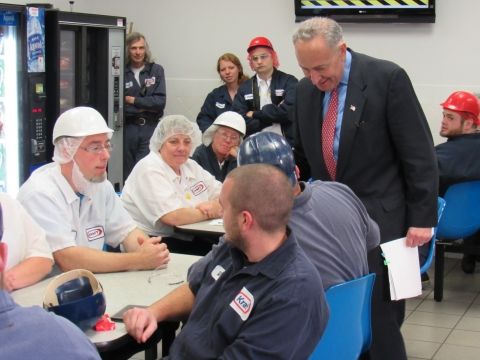 U.S. Senator Charles D. Schumer visited Walton on Wednesday, Nov. 25 to celebrate a deal that will keep the Kraft-Heinz plant in the village open for at least five years.

Schumer toured the plant with local officials and company representatives, then spoke to media and a room full of Kraft employees.

“This month, I got two gifts,” he told the crowd. “One gift was when we got Kraft to say they'd keep the plant open. That was the best gift.”

The other gift, he joked, was a Medicare card, issued on his birthday, two days earlier.

The plant was one of three in New York slated for closure. The others, in Avon and Campbell, were also saved by the deal.

Schumer said that the deal, which will provide up to $20 million dollars in state funding to match company investments in the plants, was part of a “carrot and stick” approach he took when dealing with company officials.

Schumer worked with New York Governor Andrew Cuomo to secure the state funding. In return, the company pledged to keep two of the plants open for at least five years and to keep the Campbell plant open for two years while a buyer is sought to take it over.

Above: Schumer spoke to Kraft employees and the media about the deal which could provide up to $20 million in state funding to the company in return for a pledge to keep factories open. Photo by Robert Cairns.

“For five years, we're guaranteed to have no fewer than the 141 employees we have and we may get more,” Schumer said. “The good news is that this plant, this wonderful plant, is going to stay open and your jobs are safe.”

He said the effect of the closure would have gone beyond the employees to the dairy farmers who supply milk to the plants, and beyond there to the businesses that service the farms. Schumer said that the deal is enforceable. “There's a penalty clause,” he said. “If Kraft goes back on it, they'll have to pay millions of dollars.”

Above: Walton Supervisor Bruce Dolph was one of the local officials on hand to thank Schumer for intervening when Walton's largest employer was threatened with closure. Photo by Robert Cairns.

He said that he expects the plant to be safe well beyond the five years stipulated in the deal and told the crowd, “As long I am your senator, I will watch like a hawk what goes on here.”

Delaware County Board of Supervisors Chairman James Eisel said that he had a sleepless weekend after learning on a Friday that the plant was on a closure list, but was relieved when the deal was announced.

“We're happy you're our senator,” he said. “We really appreciate you doing this.”

Walton Mayor Ed Snow said that the closure of the plant “would have shut down the village.” He told Schumer, “We're glad to have a champion like you.”

Town of Walton Supervisor Bruce Dolph also thanked Schumer for his assistance in the matter.

In a prepared news release, Schumer said, “This agreement that Governor Cuomo and I forged with Kraft-Heinz is something we can all be thankful for this Thanksgiving.”