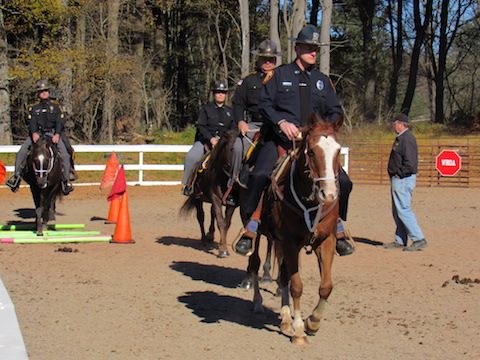 Above: Mounted officers rode through obstacles during a demonstration of skills on Friday. Photo by Robert Cairns.

Delaware County has its first mounted police patrol since the 1980s.

Six members of a multi-jurisdictional force of cops on horseback graduated on Friday, Oct. 23 from a week-long certification course held at Golden Gait Farm in Masonville.

Delaware County Undersheriff Craig DuMond was one of the graduates. He said that mounted patrols have been part of Delaware County’s history since the sheriff's office was founded in 1797, and existed as recently as 30 years ago.

“Delaware County was well-distinguished in regard to former Sheriff [Levon] Telian having a mounted division,” DuMond said.

Above: Officers and horses were tested as they rode around a police car with lights flashing and the siren blaring. Video by Robert Cairns.

DuMond said that horses are still useful, especially for searches and crowd control.

“The role of a police horse is still very relevant,” he said.

Officer Richard Pelzer of the Warren County Sheriff's Office, a state-certified horse instructor, taught the course that included both classroom work and riding designed to acclimate the horses to loud noises and crowds.

Above: Instructor Richard Pelzer gives commands to officers who participated in a week-long training course. Photo by Robert Cairns.

On Friday, Pelzer put the officers and horses through their paces during a demonstration of what they had learned.

The mounted patrol demonstrated skills as simple as walking in a line,and as advanced as circling a police car with its lights and siren blaring. The horses walked between burning highway flares and stayed under control as gunshots were fired.

Pelzer said that the horses were introduced slowly to obstacles and noises.

“We expose them gently to it,” he said.

Pelzer said that the seven-day certification course is designed for officers who already have riding experience.

He said that horses allow officers to access areas that are otherwise inaccessible and give them a different perspective.

“In searches, the horse is invaluable,” Pelzer said. “You're nine feet in the air and you have a totally different view.”

In addition to the practical uses for horses in police work, Pelzer said that the animals are good for public relations.

“Certainly, there is a great PR side to it,” he said. “Nobody ever wanted to pet my police car.” DuMond agreed.

“In today's police-community relationship, we want to do everything we can to encourage a strong, positive relationship with the community,” DuMond said.

DuMond said that he spoke to former Sheriff Telian shortly before Telian's death last year. He said that Telian told him to count the number of deputies who had done their patrols on horseback and those who had worked from police cars. He said it would take decades for the number of motorized cops to catch up.

“He was totally correct,” DuMond said.

Above: Horses demonstrate that they have overcome a fear of fire as they walk between burning road flares. Photo by Robert Cairns.

The current sheriff, Tom Mills, was on hand for the graduation ceremony. “It's a great program and I'm glad to see it brought back,” he said.