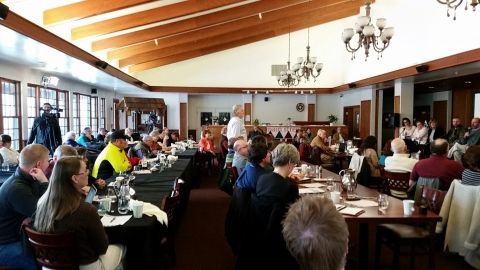 The conference, which was held on Monday, March 23 and Tuesday, March 24 at the Hanah Mountain Resort and Country Club in Margaretville, aimed to bring together business owners, county and municipal officials and state development coordinators to discuss economic development in the Catskills.

The majority of attendees and presenters were from Delaware County, where the MARK Project is based, although some came from as far away as the Greene County village of Catskill, the Ulster County town of Shandaken and the Sullivan County village of Roscoe. (Full disclosure: I spoke during a media panel about editorial independence from advertisers and of the importance of putting fabulous photos into press releases.)

Much of the discussion focused on tourism, which many panelists and audience members said is poised to boom in the Catskills.

"Are we ready for it when it gets here?" Ellsworth asked on Tuesday.

Videographer Jessica Vecchione shot video of the conference and released this teaser, below.