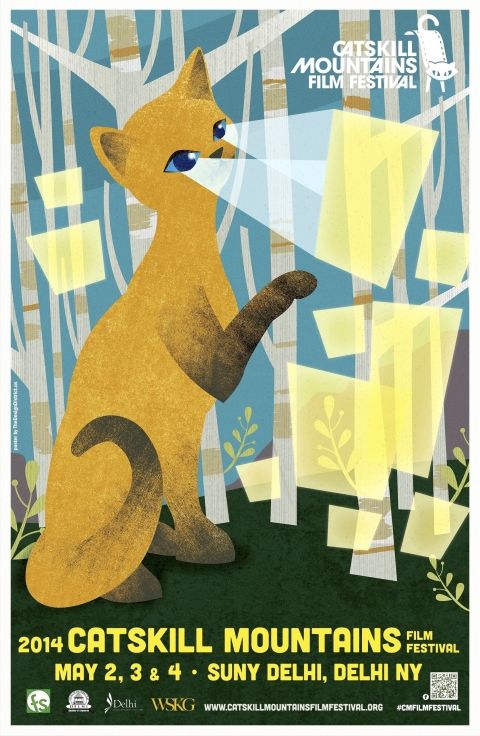 Who needs an Oscar? The first place winners at the Catskill Mountains Film Festival take home a home-grown version of the iconic golden statuette: the "Catty," a cat hand-carved by a Catskills woodworker out of foraged mountain birch.

One hundred films hand-picked films from New York State and beyond will screen at three local venues during the 2014 festival, which runs from Friday, May 2 through Sunday, May 4.

Adult, high school and college-aged filmmakers will vie to win the coveted Catty in each of six categories, from narrative and documentary features and shorts to music videos and animation.

Their work will appear alongside the work of established filmmakers, including actor Bill Pullman, Academy-Award-winning director Roger Ross Williams, and Oscar-nominated director David France. On Saturday night, the filmmakers will walk a red carpet lined with photographers to the awards ceremony.

Despite the big names and the glitz, local documentary filmmaker Jessica Vecchione, the festival's organizer, says that the festival will have a hometown feel.

“This is not the Hollywood or Indie-wood world," she said. “Our aim is to hear about people meeting each other, networking, talking, helping people make their films and do their art.”

To that end, there are some unusual items on the festival schedule. Middle schoolers will compete in their own 10-minute short film category. Folks without fancy equipment can enter the “iPhoneography” category, for films made with a non-professional camera.

Vecchione herself only began making films in 2008, and she has designed the film festival to welcome and encourage new filmmakers, especially those who may not be ready to submit to the big-name festivals. Locals, particularly students and fresh-faced filmmakers, are the stars of this show.

Vecchione believes that every filmmaker should have the experience of having a group of people watch their film on a big screen. Not having that opportunity is “missing part of the process,” she said.

“Every time it happens — if it’s a minute or an hour — when that screening’s over and people are looking at me and asking questions, it just makes me want to make more films,” she said. “We want to give that experience to new filmmakers. That’ll keep them hooked.”

Roughly 80 percent of the films that will screen at the festival were made by New York State filmmakers.

The festival's organizers decided to concentrate most of their marketing in New York, but to leave opportunities for less local films to submit as well. They used Withoutabox.com, a submission clearinghouse owned by Amazon, to advertise the festival to nationally. As a result, they got 200 entries.

“That really shocked us,” Vecchione said. “I told everyone we’d probably get 75, but I would’ve been happy with 50.”

So far, the committee has gotten RSVPs from about 60 percent of those participants to make the trek to the festival and to field question-and-answer sessions following their screenings.

“We’re looking forward to meeting these filmmakers whom we feel we have a relationship with already,” Vecchione said. “All the filmmakers will wear lanyards to identify themselves, so we’ll know who to go up to and shake their hands.”

One of those filmmakers is Sean Gallagher of Westchester, who will be showing his documentary, “Brothers of The Blacklist.” The film tells the story of a 1992 racial profiling incident at SUNY Oneonta that became the longest-litigated civil rights case in American history. While investigating an attack on an elderly woman, police requested the names and addresses of all 125 black men attending SUNY Oneonta, “under the assumption that if you were black, you were a suspect,” Gallagher said.

“It really shocked me that such an incident occurred at the school, but I knew nothing about it, just like the rest of the students on campus and many in the community,” he said.

Because the incident happened in the local area, Gallagher knows that his film might hit close to home. Racism remains a live issue on the SUNY Oneonta campus, where a new professor's arrest on traffic charges recently sparked fears of racial profiling, and university hiring decisions have come under fire from a student anti-racism group.  "There is always the possibility of disagreements in views," Gallagher said. "I hope it really triggers some dialogue.”

It has been Vecchione's dream to bring a "modern cultural art event” to the Catskills. With her at the helm, the Catskill Mountains Film Festival has grown explosively in just two years.

In August 2012, Vecchione organized a small "test festival,” where 42 films, all with Catskills connections, were screened at the SUNY Delhi campus and in a nearby church basement. Three hundred people attended, so Vecchione decided to begin organizing “a real one.” A year later, the festival organized in series of filmmaking workshops at SUNY Delhi and had an organizing committee of 25 people.

After a year and a half of planning, the 2014 is the real deal. Festival organizers landed Hollywood veteran Bill Pullman, who starred in 1990s blockbuster "Independence Day," as the festival's honorary chair, and David France, a part-time local resident whose film "How to Survive a Plague" was nominated for an Oscar in 2012, as its keynote speaker. Academy Award winner Roger Ross Williams, who also has close ties to the local area, will serve as a festival judge, and will screen his newest film, “God Loves Uganda."

France, who has been to countless film festivals all over the world, said the festival will inspire local filmmakers.

“I’ve been to festivals over the world, in big cities and small villages, and they all have the same impact," France said. "The festivals encourage creativity and storytelling, and they bring people together to share insights about the world around us."

The Catskill Mountains Film Festival. May 2, 3 and 4. Screenings at five Catskills locations: the Open Eye Theater in Margaretville, the Walton Theatre in Walton, and three on-campus venues at SUNY Delhi — the Okun Theatre, Farrell Commons and the Centennial Center. Awards ceremony 7 p.m. Saturday, May 3 in the Okun Theatre. A complete list and schedule of participating films can be found on the festival’s website, catskillmountainsfilmfestival.org.

The Watershed Post is a sponsor of the Catskill Mountains Film Festival.

Below: A trailer for the Catskill Mountains Film Festival, produced by Vecc Videography.

Music By Prudence wins Oscar
Roxbury on the red carpet