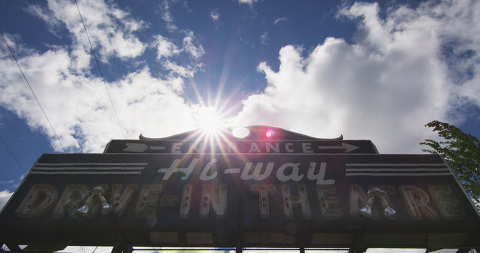 Top: The sign for the Hi-Way Drive-In. Photo courtesy of “Enjoy Your Intermission.”

Some Catskills families run farms or general stores; for Roger and Sharon Babcock, the family business is the Hi-Way Drive-In Theatre on Route 9W in the Greene County town of Coxsackie.

Like a family farm, a drive-in is an anachronistic business. There are only 400 or so drive-in theaters left in the United States, and some, like the Hi-Way, are still showing movies on 35 millimeter film, a format that movie studios are abandoning.

But nostalgia for artifacts of the 1950s (the Hi-Way opened in 1951) is strong, especially in the Catskills. The Babcocks told the Daily Freeman last year that their audience is loyal and growing, with regulars coming weekly to park their cars and watch a film outside under the stars.

The Hi-Way caught the imagination of a pair of young filmmakers, director Tansy Michaud and cinematographer Adam Carboni, and is now the star of its own movie: “Enjoy Your Intermission.” Michaud and Carboni spent time with the Babcocks during the summer of 2014, the last season the Hi-Way showed 35 millimeter films.

Above: Michaud and Carboni filming an interview with a patron of the Hi-Way Drive-In. Photo by Philip Doueihi.

The short 12-minute film turns a loving, meditative eye on the business of running a drive-in: it follows Roger and Sharon as they load new films into finicky antique projectors and mow acres of endless grass. Through their lens, the Babcocks seem like farmers tending film projectors and moviegoers instead of hay and cows.

Above: Watch “Enjoy Your Intermission,” a film by Tansy Michaud and cinematographer Adam Carboni.

Also like farmers, the Babcocks face an uncertain future. They spent 2014 switching the theater over to digital projection, a costly project, and the filmmakers watched as the family makes the commitment to change with the times. Spoiler: there's a happy ending. The Babcocks plan to open the Hi-Way as soon as the weather warms up in 2015.

The Watershed Post interviewed Michaud and Carboni about their film, the Hi-Way and their love of drive-in theaters.

Q: How did you meet the owners of the Hi-Way Drive-In in Coxsackie, and why did you decide to do a documentary about them?

Tansy Michaud: Initially, we wanted to make a film that captured a “day in the life” of an American drive-in movie theater. We both have a love for all things nostalgic, and the surviving drive-ins have that certain antiquated feel that harkens back to a simpler time in our country’s history. We then spent time traveling up from New York City to visit family in the Catskills and began to realize that the region is a haven for drive-in movie theaters, so we visited a few to see what they were all about.

The last theater we visited was the Hi-Way. It’s hard to describe the feeling when all the pieces of a story begin to fall into place, but we immediately fell in love with that little drive-in and the people who make it the magical combination of community and nostalgia that it is. After initially talking to Roger and Sharon Babcock, the owners, we discovered that they were still running four 35mm film projectors, but would soon be facing the expensive conversion to digital. From there, the documentary slowly morphed into a story about this monumental turning point and the goal became to capture the Hi-Way during its final summer of projecting 35mm films.

Q: What is special about this drive-in in particular?

Tansy Michaud: In terms of the drive-in itself, what really sets the Hi-Way apart is that it has four screens, each showing a double feature. That's eight movies each night, which is incredible. Roger always gets the latest releases, and he always dedicates screen two to children's flicks like the newest Pixar or Disney films. There is no specific date to when Roger decides to open or close the theater for the season. Mainly, it is all weather-related. As soon as it warms up (normally mid-March to early April) the first movies will be shown. And then they will play all summer until usually around mid-October when it just gets so cold that folks stop coming out.

In other respects, the Hi-way is special because of the people who own it and work there. It’s really become a way of life for Roger and Sharon, and that is evident when you talk to them about it. The Hi-Way opened in 1951 and has been screening movies every summer since. At that time, there were about 4,000 drive-ins in America. Now that number has dwindled to 400 or fewer. Roger began working at the Hi-Way in 1971 in the ticket booth. Over the years he learned everything there is to know about the 35mm projectors: how to take them apart, put them back together, fix them when they’re broken, etc. He met Sharon there, when she began working there, and they got married. Eventually, when the original owners decided to sell the theater, Roger and Sharon purchased it and took over all aspects of its operation. It is truly in their blood and has been a part of their life for years and years and years.

Above: Adam Carboni, Roger Babcock, Sharon Babcock and Tansy Michaud at the Hi-Way while filming. Photo by Adam Carboni.

Q: Are many drive-ins converting to digital, or is the transition forcing many of them to close?

Tansy Michaud: We really can’t answer for all of the drive-ins across America, but that is the big question. It’s sad to say, but it’s quite possible we’ll be seeing a sharp decline in the number of drive-ins left in America. At around $75,000 per digital projector, it’s a pretty big commitment to make for a business that doesn't earn huge amounts of profit.

Q: Were drive-ins popular in the Catskills? When?

Tansy Michaud: In the heyday of the automobile, drive-in movie theaters were a fantastically popular source of entertainment. At that time, in the 1950s, more than 4,000 drive-ins provided family fun and date nights for people all across America. This definitely included the Catskill region. In fact, constant automobile traffic up and down 9W (at a time when I87 didn’t exist) was the reason the Hi-Way Drive-In opened up where it did. Today, New York is still one of the top 5 drive-in states, with 6 of the nearly 30 existing in the Hudson Valley region.

Above: Roger Babcock checks on a projector in a still from "Enjoy Your Intermission."

Q: Is running a drive-in a viable business anymore, or is it a pure anachronism?

Tansy Michaud: It really depends what you mean by “viable.” If you simply mean “Can it continue to run,” the answer is yes. If you mean “Can it earn a huge amount of profit,” the answer may very well be no. The simple fact of the matter is, as Roger so eloquently phrased it in the film, “If you’re not here to enjoy yourself and try to make a dollar to survive in the industry, which is a tough industry to sit here and survive in, then you shouldn't be doing it. If you’re only doing it to take money from people, you’re in the wrong business. You have got to care.” And that is the truth. There are no drive-in theater owners who do the job to get rich. They simply do it because they love it, and it is their way of life.

Q: What's your favorite movie you've ever seen at a drive-in?

Adam Carboni: The first drive-in movie I saw was "Godzilla 2000" in 1999. I was 10 years old at the time, and as silly as that movie and its over-the-top visual effects seem now, I remember being terrified because not only was I outside, exposed to the dangers of the world, but it was also raining. It was a dramatic, insanely fun experience that I’ll never forget.