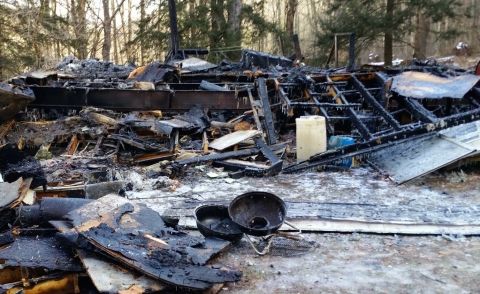 A family of three, including an infant, was left homeless by a fire that completely destroyed their double wide trailer home on Oliverea Road in the Ulster County hamlet of Big Indian in the early morning hours of Wednesday, Jan. 14.

The two parents, a three-month-old baby and multiple pets escaped unharmed, but the home at 33 Oliverea Road was a total loss, according first responders.

“It was an accidental fire caused by a woodstove,” said Big Indian and Oliverea Fire Department Chief Jody Rossitz.

The fire was called in around 3 a.m. by one of the homeowners, who drove down to the firehouse in Big Indian and pressed the fire alarm button, sounding the station’s siren.

The homeowners could not be reached in time to report this story, but Rossitz said that they have relatives who live nearby and that the Red Cross has been alerted to their possible needs for shelter and clothing.

Assistant Chief Chuck Perez was the first firefighter to arrive at the scene around 3 a.m, when the temperature in the Oliverea Valley was below 0 degrees.

“I could see the glow as I left my driveway,” said Perez, who lives nearby. “It was quick.”

By the time Perez arrived at the trailer, the fire was already fully engaged, and all house’s occupants, including multiple pets, were safely outside and unharmed.

Three fire trucks and 30 to 35 firefighters from Pine Hill, Phoenicia, Olive, Woodstock and West Hurley were at the scene throughout the night, as were first responders from the Shandaken Ambulance Service. The Fleischmanns Fire Department was on standby.

First responders worked to contain the fire from the outside, and did not attempt to enter the structure to salvage it.

“There was no interior; it was all exterior [firefighting],” Rossitz said.

Soon after firefighters arrived, the electric line connecting the house to the grid fell off the structure. The live wire was stretched across the driveway, forcing the first responders to leave the driveway and approach the scene from another direction, along Lasher Road.

An electrical crew from NYSEG arrived at the scene two hours later to disconnect the power, causing a power outage for 10 or 12 houses along Route 47/Oliverea Road this morning.

The cold weather caused complications for firefighters at the scene. With the temperature at negative 3 degrees, water from the firehoses soon created a slick of ice over Route 47 and portions of Route 28. First responders called for a sand truck to come apply sand to the road surface to prevent accidents.

At 10 a.m., the remains of the house were charred and ice-covered.

Big Indian firefighters say that it is unusual for a fire to be reported at the fire station by someone pressing the fire button at the station itself.

“There’s been a series of malfunctioning alarms,” Rossitz said. “At first, I thought, ‘Oh, here’s another.’”

But this time, it was a lifesaver. The homeowner didn’t call 911 from her house because the fire was already too intense for the family to remain inside, firefighters said.

“She did exactly the right thing,” Rosstiz said.

Correction: A previous version of this article incorrectly stated that an electric fell across the driveway, block access to the burning home. In fact, the line fell across Route 27/Oliverea Road, forcing first responders to re-route along Lasher Road to get to the driveway, which remained clear.

Update 1/15/15: We've heard from the family, Chrystal and Drew Sylvester, who tell us that donations to the Sylvester House Fire Fund on GoFundMe will help them get back on their feet.

Below: More photos from the scene. 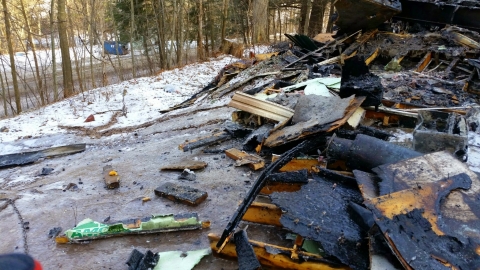