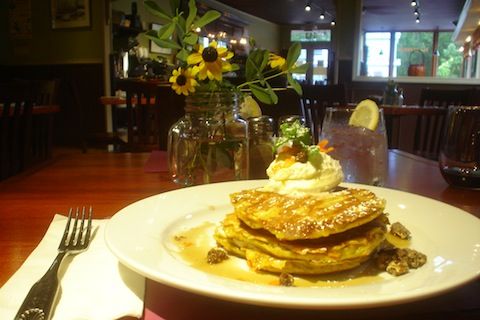 It took Michael and Amelia Hegeman eight years to find the perfect spot to open Zephyr, their new farm-to-table restaurant. The first time the couple set eyes on the 100-year-old building in the Ulster County hamlet of Pine Hill that is now Zephyr's home, they thought, “no way.”

“It had taken a lot of abuse,” said Hegeman, Zephyr's chef and owner.

But, with help from Amelia's family, the Hegemans bought the building in May, renovated it, and opened Zephyr for breakfast and lunch in August. Over Labor Day weekend, they expanded to dinner. Now the restaurant is open Thursday to Monday, serving all three meals.

The new restaurant and its emphasis on local food has been embraced by its mountainside community. Hegeman said that diners return regularly; sometimes, more than once a day.

“We do have people who come in for breakfast and then return that evening for dinner,” he said.

Michael and Amelia Hegeman have worked as caterers and as the chef and pastry chef, respectively, at the Cooperage Inn in Baiting Hollow on the North Fork of Long Island. They are well-schooled in the philosophy of local food. At Zephyr, their aim is to craft well-loved favorites made with local ingredients.

“I see us as American comfort food,” Hegeman said. “All our cooking–baking too–is made day by day, all from scratch, including desserts. You won’t find anything store-bought. And we have daily blackboard lunch specials.”

Assisting Hegeman in the kitchen and helping out at the bar is sous chef Jonathan Jones. He used to work at the former Loretta & Charles restaurant in Shandaken, where he was the son of the owners.

Amelia Hegeman, a trained pastry chef, makes all the breads, rolls, granola parfait, and desserts from scratch. Her cheddar biscuits, a customer favorite, are made fresh daily.

Michael Hegeman works with seasonal produce from local farmers whenever possible. He buys his grain-fed, pasture-raised and free-range chickens and Berkshire pork chops and sausages from Mulligan Creek Acres in Sprakers, New York.

All this means that the menu can change from day to day.

“I see what’s available and the price,” Hegeman said. “It just means that I have to be more creative every day.”

The dinner menu demonstrates that challenge-yourself spirit by ranking its dishes into levels of difficulty, from “Beginners” such as Lumbered Mountain Man Nachos ($12) to “Advanced” choices, like the cedar-planked, honey-roasted organic Scottish salmon ($28) with a smoky sweet cherry tomato ragout and the marinated, grassfed, local 12-ounce boneless rib-eye steak ($30) with herb roasted fingerling potatoes and fizzled onions.

In the summer, Hegeman tackled the annual zucchini glut by making zucchini fritters ($9), which come with a roasted garlic aioli and were drizzled with sweet basil pesto drizzle and aged balsamic reduction. They are one of the restaurant's most popular dishes.

A warm red quinoa salad, with chickpeas, avocado, candied pecans and carrot lime vinaigrette ($13), recalls one of the building's former tenants, a beloved Indian restaurant. A popular pasta request is the penne a la vodka ($18), served with a rich herb tomato cream sauce.

Zephyr launched with breakfast and brunch, and those meals have earned a dedicated following. Among the top sellers are twists on traditional: pancakes, french toast and eggs Benedict. The signature treat is the Carrot (Pan)Cake Stack ($11)–three large carrot cake batter pancakes, frosted with cream cheese and festooned with candied pecans.

The craft beers are sourced from regional breweries, including Keegan Ales of Kingston and Brewery Ommegang of Cooperstown. Wines include selections from New York, both upstate and Long Island, as well as favorites from California.

The restaurant's newest addition is a prix fixe dinner special: three courses and a glass of wine for $21.95, served from 4 to 6 p.m.

Zephyr's building, a grand structure with a two-story porch on Pine Hill's Main Street, has seen a lot of history. It was built in 1890, at the peak of the village's popularity as a resort destination for summering Manhattanites, and has housed a succession of businesses, including a tavern.

In the 1930s, it was home to the Zephyr General Store, the restaurant's namesake. The Hegemans have an enlarged photo of it on the wall, its sign advertising ice cream, soda, souvenirs and post cards to the village's summertime resort visitors.

“We tried to think of a name for months and couldn’t decide,” Hegeman said. “The someone pointed out the photo. We ran with it. It fit.”

The Hegemans themselves came to the Catskills as weekenders. Amelia's parents, Steve and Erin Gould, have a weekend home near Pine Hill. The couple, who have four children, began visiting 14 years ago. Hegeman started a business plan for a restaurant in 2002, and somehow kept returning to Main Street Pine Hill.

“We love the area and this town,” he said. “The idea of opening our own restaurant kept coming up again and again.”

With the help of Amelia's family, the couple bought the building in May 2014. “We owe a lot to my wife’s family and Uncle Scotty Gould,” Hegeman said.

Then construction began. Existing electric and plumbing had to be replaced. The carpeting was ripped out, revealing century-old wide plank floors. A new commercial kitchen had to be installed.

The Hegemans, who have four children, aged six months to 11 years old, didn't move their family to the Catskills until August, so Pine Hill resident Florence Hamling handled the majority of the renovations.

“Florence oversaw the installation of a new commercial kitchen,” said Hegeman. “She was the backbone that made the operation work.”

The walls were repainted a comfy apple green with deep plum wainscoting, and were hung with original art by local photographers and artists. Fans are hung from a wooden tongue-and-groove ceiling. The warmth of the two rooms, the front one boasting an old long wooden restored bar, rises from the plank floors, which are buffed to a golden brown.

The atmosphere encourages neighborliness. On a recent weekend, diners table-hopped to visit with friends. It's exactly what the Hegemans wanted.

“Our customers are not only tourists and weekenders, but also people from the community,” Hegeman said. “We want this to be place you can come, feel comfortable and enjoy.”

Correction: Due to an editing error, a previous version of this story mistakenly stated that Amelia's parents and uncle are related to the family of Catskills philanthropists descended from the 19th-century Catskills-born railroad mogul Jay Gould. In fact, the Hegemans say, there is no relation. Additionally, the Hegemans came to the Catskills as weekenders and skiers, not as "summer people," as this article previously stated. And the zucchini fritters are still on the menu.