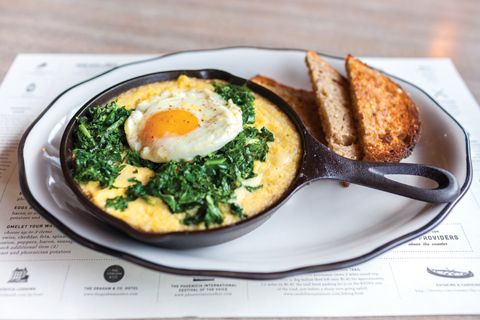 Above: The Phoenicia Diner serves a variety of skillet breakfasts using local eggs. Photo by Richard A. Smith.

Over two decades of driving back and forth between Brooklyn and Margaretville, Mike Cioffi noticed an odd traffic pattern.

“I’d see these big, mass-production food company trucks driving up here and delivering to all the Catskills restaurants,” he said. “And then I’d see the farm trucks driving the opposite direction, going down to the city.”

“I didn’t want to do a big 50-page menu, because you can’t offer that many things without a lot of it being frozen,” he said.

The Phoenicia Diner’s menu fits on one paper placemat that changes daily. It stars meat, fish, eggs and vegetables that travel only a few dozen miles to the kitchen of chef Mel Rosas.

Cioffi’s recipe for breakfast and lunch dishes works: his first year, business grew steadily. He expanded his hours from five to seven days a week during the summer, drew big weekend crowds and began construction on a patio that will eventually add outdoor dining.

Two other restaurateurs banked on locally sourced ingredients as the basis for new enterprises in 2012, as well. Paul Nanni and Marla Puccetti opened The Heron (40 Main St., Narrowsburg, 845-252-3333, theheronrestaurant.com) in the Sullivan County town of Narrowsburg, and Justus Kempthorne and Inez Valk-Kempthorne launched Table on Ten (52030 Main St., Bloomville, 607-643-6509, tableonten.com) in Bloomville, in Delaware County. The Heron does upscale comfort food for both lunch and dinner; Table on Ten focuses on lunch, with pizza nights on weekends and lots of evening pop-up events.

While it might seem like simple logic for restaurants to capitalize on the plentiful availability of Catskills-grown produce and meat—not to mention other goods made locally, such as cheese, chocolate and whiskey—there are surprisingly few full-service, year-round places that do. But if the success of the three newcomers in their first years is any indication, the market is ripe for that model.

At the Peekamoose, co-owner Marybeth Mills enjoys knowing that those farm-delivery trucks that head downstate stop at her place first.

“By the time those potatoes are crossing the George Washington bridge, they’ve already been peeled in my kitchen,” said Mills, who, with husband and partner Devin, the chef, celebrates the Peekamoose’s 10th anniversary this year. Devin Mills grew up in Haines Falls and has relatives who own the Andes Hotel, so when the couple left successful careers in NYC restaurants to open their own place, the Catskills were a natural fit.

“It’s all we ever wanted to do. It just makes sense for us, it makes sense for our food system,” she said. All the same, it was a scary venture, she said; no one else was basing a business model on locally sourced fare here in 2004.

Mills says her kitchen lacks a can opener, and the only thing she uses a freezer for is ice cream. Her conversations with farmers generally consist of her asking what’s plentiful that week, and then leaving it up to her husband to figure out how to build a dinner menu around it.

“We want to be the easiest part of the equation for the farmers,” she said.

The owners of Oriole 9, a mainstay of downtown Woodstock since 2005, take access to local food to another level. In addition to buying from farmers, they maintain their own organic garden. It’s a partnership with the Woodstock Day School, which provides produce for the restaurant and a real-life laboratory for the students.

It’s a difficult enterprise operating a full-service, year-round restaurant that relies on a majority of local ingredients (as opposed to one or two dishes or occasional specials). Availability of supplies fluctuates. blight happens. There’s no one-stop shopping. The benefits, though, are many: chief among them, supporting small farmers, some of whom have figured out exactly which kitchen door to knock on when they happen to have an extra couple of crates of heirloom tomatoes to sell.

Not to mention, the food is delicious—even to diners who may be oblivious to the locavore trend.

“People who care about that really care about it,” said the Phoenicia Diner’s Cioffi. “But the people who don’t care about it can still tell that it’s a freshly prepared meal that tastes good and didn’t come out of a freezer.”

This article originally appeared in the print version of the 2014 Catskills Food Guide, our annual publication covering local farms, restaurants and food purveyors. Find a copy near you here