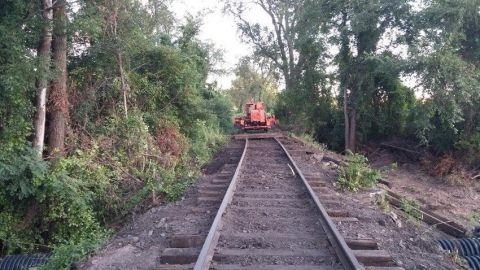 Above: Catskill Mountain Railroad equipment repairing a portion of the track on the old Delaware & Ulster corridor last week. Photo by John Marino and posted on the CMRR's Facebook page.

In the long-running battle of rails versus trails in Ulster County, the trails just won big.

In an 18 to 4 vote, the Ulster County Legislature passed Resolution 275 on Tuesday, August 19, supporting the conversion of an old Ulster & Delaware railroad right-of-way between Kingston and Boiceville into a hiking, walking and biking trail.

The Catskill Mountain Railroad (CMRR), which runs a tourist railroad on the rail corridor and holds a lease on the right-of-way that expires in 2016, has been lobbying hard to keep railroad tracks running all the way from Kingston to the town of Shandaken at the other end of the county.

Last night's vote shows that the bulk of the county's officials are in favor of a plan which puts some of the tracks -- a stretch from Kingston to Boiceville -- out of commission permanently to make way for a trail. The CMRR has proposed an alternate plan to have a trail run alongside the railroad tracks.

"We are deeply grateful to the outpouring of support from volunteers and advocates, including members of of trail and community organizations, land trusts, municipal governments, and business representatives such as the Ulster County Board of Realtors, several local & regional Chambers, and members of the Hudson Valley Building & Trades Union -- stakeholders from all corners of Ulster County," said Kevin Smith, the co-chair of the Friends of the Catskill Mountain Rail Trail, in a statement on the group's Facebook page last night.

The legislature also passed two other resolutions yesterday -- 291 and 293 -- to fund "preliminary engineering and right-of-way incidental work" on converting a 1.8-mile stretch of railroad in the city of Kingston into a trail. The goal is to connect this first trail to the rest of the envisioned trail.

The cost of the work on the Kingston portion of the trail is $245,000, which the resolution describes as "100% reimbursable utilizing New York State Dedicated Funds and Federal Highway Funds."

The debate over the rail trail has become a divisive political issue throughout Ulster County county, and has caused partisan billboards, packed public meetings, and a lawsuit.

Resolution 275 endorsed a "segmented rail with trail" plan, which is the preferred policy of County Executive Michael Hein. In the text of the resolution, county legislators stated that they "shared a vision" with Hein.

Railroad advocates did win one concession: Resolution 275 contains an amendment stating that "no railroad tracks shall be removed in any segment except by resolution of the Ulster County Legislature." That means that Hein can't rip up the tracks without permission from county legislators.

The resolution also states that the legislators want to preserve some railroad operations "between Boiceville and Phoenicia, where such operations have been focused for the past three decades."

Ernest Hunt, the president of the Catskill Mountain Railroad, said today the resolution isn't as bad for the railroad as it appears. For one, he said, the resolution might end the railroad's legal dispute with Ulster County, which had sought to terminate the CMRR's lease before 2016.

"The resolution states very clearly that the [new pro-trail] policy does not begin until the end of our lease in 2016," Hunt said. "I think this is very helpful is getting the litigation about our lease wound down."

Hunt also found the prohibition on ripping up the tracks without legislative permission promising.

"There is still an opening to do do rail with trail from Kingston to the eastern edge of the Ashokan Reservoir," he said. "We sense that the legislature really want to research that issue. It leaves the door open, I think, for further study."

More study is exactly what Manna Jo Greene, one of the four legislators who voted against the resolution, wants. She issued a memo to her fellow legislators calling the vote "premature," and asking for a comprehensive study of the rail trail issue.

"To establish such a policy without even holding a public hearing seems unwise, and furthers the perception by many of our constituents that this policy is being pushed through without due process," Greene wrote.

The Catskill Mountain Railroad has been putting its efforts into putting on high-profile train-related events to the railroad corridor before its lease expires. A Thomas the Tank Engine train series is scheduled for September.

Below: The three resolutions regarding the Ulster rail trail that passed the Ulster County Legislature August 19, 2014, along with Manna Jo Greene's memo opposing resolution 275.