Storm floods Jeffersonville, knocks out power to thousands in Catskills 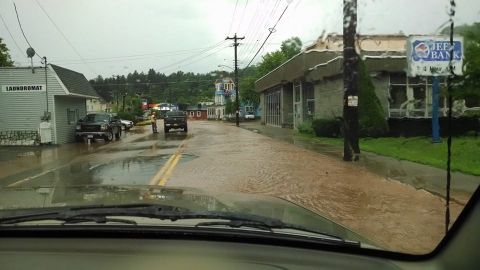 Heavy rains and thunderstorms on Wednesday afternoon caused major flash flooding in the Sullivan County village of Jeffersonville, and widespread power outages across the region.

The flooding in Jeffersonville was intense enough to bring swift-water rescue teams to the village. Eyewitnesses in Jeffersonville reported about two feet of water on Main Street, and deeper water in some areas.

Above: Main Street/Route 52 in Jeffersonville at 2:30 p.m. on Wednesday, July 2. Photo by Tiffany Karen Denier.

Above: Main Street/Route 52 in Jeffersonville at 5:30 p.m. on Wednesday, July 2. Photo by Tiffany Karen Denier.

In nearby Callicoon, the Villa Roma Resort also sustained flood damage, according to the Sullivan County Democrat, which posted some photos of damage taken by hotel marketing manager Tony Carlucci on the newspaper's Facebook page.

In Kohlertown, part of the village of Jeffersonville, two firefighters rescued several people who were trapped in a car surrounded by floodwaters, according to a first responder who spoke with the Watershed Post.

Local firefighers John Mall and Peter Cummings drove a fire truck through floodwaters to the trapped car and rescued its occupants around 3 p.m. today, according to the first responder, who asked not to be named.

Another car was spotted upside-down in the river, prompting an investigation by a swift-water rescue team, but the team found that the car was empty.

As of 5:45 p.m., according to the first responder, no injuries due to the flood had been reported in Jeffersonville.

Above: Photos of flooding on Jeffersonville's Main Street, posted on Facebook by Jackie Lynn Brockner.

In a statement posted on Sullivan County's website on Wednesday afternoon, county manager Joshua Potosek announced the closing of several county roads, and wrote that high winds had toppled many trees in the area:

Due to flooding associated with heavy rains, the following county roads have been closed: CR 127 near Jeffersonville, CR 164 in Kohlertown, and CR 149 at the intersection of State Route 52 in Youngsville, all along the Callicoon Creek.  County crews have been dispatched to the affected areas.  We have received reports that Main Street Jeffersonville is currently flooding.  If possible, please avoid driving into the area between Hortonville in the Town of Delaware to Youngsville in the Town of Callicoon.

County workers have also been working to clear downed trees from county roadways across various portions of the County that have been affected by heavy wind damage including Livingston Manor, Roscoe, and Shandalee.

County officials could not immediately be reached for comment.

Floodwaters came close to overtopping the core wall of the dam at Lake Jefferson during a flash flood in Jeffersonville this afternoon. Photo courtesy of Kevin Gref of Jeffersonville Hydroelectric.

Flash flooding sent water surging to the top of the dam at Jeffersonville Hydroelectric, a small hydropower plant on Lake Jefferson that delivers electric power to local radio station WJFF and the lakeside home of dam owners Kevin and Barbara Gref.

Kevin Gref, president of Jeffersonville Hydroelectric, was at the dam on Lake Jefferson throughout the flood. Gref said the water rose from 34 inches at 3 p.m. to 72 inches by 4:30 p.m., he told the Watershed Post.

At its crest around 4:30, the floodwaters came close to overtopping the core wall of the dam, but did not breach it. The dam is sound, Gref said, and as of 5 p.m., the waters had begun receding.

"I was watching lawn furniture go over the dam, and someone's pontoon float -- one of those floating platforms that you swim to. It was caught in a tree."

Although WJFF did not lose power to their Jeffersonville studio during the storm, station manager Adam Weinreich said that the station was forced off the air around 2 p.m., when power to their Liberty-based transmitter went out. The station has continued to stream online at wjffradio.org.

It took Weinreich about an hour to make the roughly 12-mile drive from Liberty to Jeffersonville on Wednesday afternoon, he told the Watershed Post. Along the way, Weinreich said, he saw many impassable small roads and bridges.

Thousands of households in Sullivan and Ulster counties lost power during the storm. By early Wednesday evening, many of the outages had been restored, but local utilities were still reporting widespread outages in some towns.

As of around 6:45 p.m., Central Hudson was reporting 2,629 households without power in Ulster County, including over 95 percent of households in the remote town of Denning. The utility also reported 402 outages in Sullivan County, all in the town of Neversink.

Katherine Speller and John Phillip Tappen contributed to the reporting of this story.

Do you have photos or flood information to share with us? Leave a comment below, or email us at [email protected].