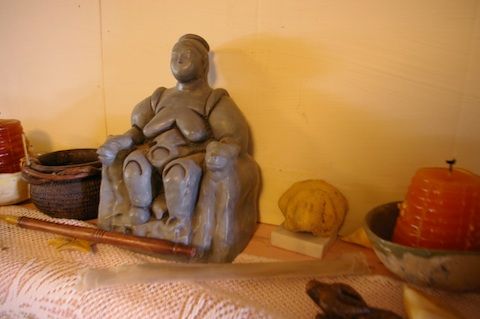 Above: A goddess on an altar at the Maetreum of Cybele in 2010. Photo by Julia Reischel.

The question of whether a tiny Pagan group's Palenville headquarters qualifies for a religious tax exemption will be heard by the highest court in New York State this year, according to lawyers on both sides of the case.

Left: The Maetreum of Cybele. Photo by Julia Reischel.

The New York State Court of Appeals has granted the town of Catskill's motion for leave to appeal in its case against the Maetreum of Cybele, a three-story former inn in the Catskill hamlet of Palenville that is the worldwide headquarters of the Cybeline Revival, a monastic branch of Paganism founded by Cathryn Platine in the 1990s.

Platine, whose religious title is Reverend Mother Battakes, lives at the Maetreum, along with a small group of the religion's followers.

Under federal law, properties owned by recognized religious organizations are exempt from local taxes, as long as they are used for religious or charitable purposes. Catskill's town officials have argued that the Maetruem's use of the property to house its members isn't religious enough to qualify for the exemption. The Maetreum has accused the town of religious discrimination, and claims that its members' use of the property is no different from the way that nuns use convents.

In 2009, after the town refused to grant the Maetreum a tax exemption for the property, the Maetreum filed a lawsuit in Greene County Supreme Court. The case has ping-ponged through the court system ever since.

In 2011, Greene County Supreme Court George J. Pulver, Jr. ruled in favor of the Maetreum, writing that the town was holding the Pagans "to a higher standard than other religious organizations.”

The town appealed, and in 2011 the case went to trial. In 2012, a second Greene County Supreme Court judge, Judge Richard M. Platkin, ruled in favor of the town, writing that the Maetreum's religious and charitable use of the property was "merely incidental to [the] residential use."

Last November, after reviewing the trial decision, a four-judge panel of the Appellate Division of the Supreme Court unanimously ruled in favor of the Maetreum, writing in a decision that it "met its burden to demonstrate that it uses the property primarily for its religious and charitable purposes."

The town of Catskill asked the New York State Court of Appeals to review the case in January.

The Court of Appeals only accepts a small percentage of cases for appeal (just 6.4% in 2012, according to the court's statistics). So the court's decision to accept the appeal came as a surprise to Deborah Schneer, the lawyer for the Maetreum.

The Court of Appeals will decide once and for all whether the Maetreum's use of the property meets the standard of "religious use."

The core of the case, according to Schneer, is whether the Maetreum's communal housing for its religious adherents meets the standard.

"The Appellate Division, unlike the trial court, clearly understood that the Maetreum's residential use of the property was in fact religious," she said. "At least in oral argument, they made the analogy to a convent."

The town is arguing that the Matreum is mainly a place for its members to live, and is only incidentally a place where religious practices occur.

Daniel G. Vincelette, the lawyer for the town of Catskill, said that the Appellate Division construed the standard of religious use too broadly, and that Greene County Supreme Court Judge Richard M. Platkin got it right.

"Judge Platkin found that the primary use of the property was residential, and that any religious use was incidental, as it would be in any private citizen's home," he said. "The legislative intent of the standard was to be narrowly construed, not as broadly construed as the Appellate Division did."

The Maetreum issued a press release on its Facebook page today about the appeal:

The Maetreum of Cybele has been forced to put all our planned projects for this year on hold because the Town of Catskill has appealed our appellate level unanimous three judge win in our court case for equal treatment under the New York property tax laws. The chairman of the Board of Catskill once vowed they would never give up their fight against what he called an illegitimate religion and Catskill is keeping that promise by appealing our victory to the highest court in New York once again forcing us to raise a large amount of money for a legal defense ... We are pretty much tapped out at this point which has been the strategy of the Town all along.

The Court of Appeals will likely issue a ruling later in 2014, according to Schneer.

Judge: Town's treatment of pagans may be discrimination, February 27, 2011

Maetreum's opposition to Catskill's motion for leave to appeal, January 2014