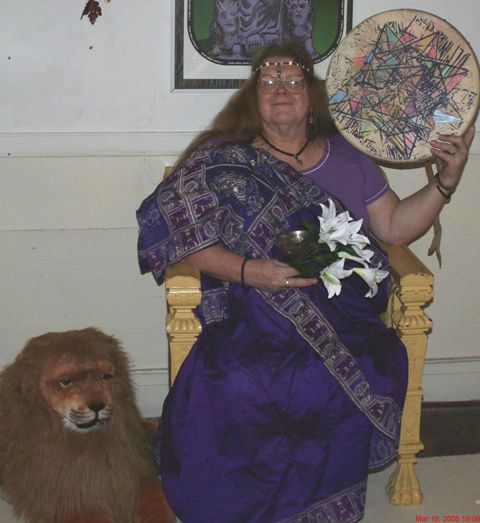 Cathryn Platine, the Reverend Mother of the Maetreum of Cybele.

Cathryn Platine, a towering 60-year-old pagan who can trace her ancestry back to one of the witches who was hung in Salem in 1692, is the Reverend Mother Battakes of the Maetreum of Cybele. (That's a formal title, like the Archbishop of Canterbury.) Like any witch, she's got enemies -- but these days, her main foe is the town of Catskill, where the tiny hamlet of Palenville is located.

The Maetreum, a three-story former inn once known as Central House, is run by a nonprofit called the Maetreum of Cybele, Magna Mater (MCMM). As a religious nonprofit recognized by the IRS and the state of New York, MCMM is legally exempt from state and federal taxes. Still, the town has refused to grant the Maetreum a property tax exemption since 2007, when the town lawyer, Daniel Vincelette, toured the building and issued a damning report describing a decrepit structure that stank of cat urine, lacked visible religious symbols, and operated as a crypto-housing project for "transgendered individuals." Not to be cowed, MCMM is suing the town for requiring property taxes on what it says is a convent and a temple.The Maetreum of Cybele: Palenville's pagan headquarters.

The battle has made Platine, whose hair flies in wild gouts atop an imposing battleship of a frame, into Palenville's loudest anti-tax firebrand. A self-taught scholar of ancient Anatolian pre-history as well as a former cabinetmaker with a passion for architectural restoration, she is the founder of what she calls the Cybeline Revival. She created the religion in 1999, she says, after the goddess Cybele commanded her in a dream to revive several thousand years' worth of forgotten pagan traditions. In 2002, she bought the inn and began teaching ecstatic drumming and Cybeline communion to a smattering of priestesses around the globe. She likes to say that she is the spiritual heir of the Catskill Witch, who is said to dance on the mountaintop that looms over the Maetreum’s three acres.

"I don't know how they can say there's no religious iconography here," Platine says as she leads me on a tour. "It's all over the place."

Not your father's iconography: Clearly that's a goddess.She points over a velvety set of antique Victorian furniture to the mantlepiece, which is draped with lace and topped with candles and a plaster statuette of large-breasted figure seated on a throne.

"That's a replica of an ancient likeness of the Goddess," she says. "This is an altar, obviously."

Nearby, atop a mammoth Victorian piano, a framed photograph shows Platine seated in a goddess throne, raising to her shoulder a tar – a drum that is sacred to the goddess.

Tars cover the entire wall of one room. Another room houses the Maetreum's collection of functioning antique telegraph equipment. ("Fighting resistance is futile" reads a poster on the wall.) A third is home to the resident ghost, Agnes. The bathrooms contain high wooden stalls and once featured the first plumbing in Palenville, says Platine, who is in the process of applying for historical landmark status for the building.

In the Matreum’s enormous kitchen, which is decorated with glyphs of "Minoan lilies," Platine says that the town has picked the wrong battle.

"The town of Catskill thinks that it has more authority than the state or the federal government," she says. "It's local government out of control. We're a religious charitable organization, an ancient reclamation of the goddess traditions dedicated to charitable work.”

Last year, MCMM accused the town of Catskill of religious discrimination in a lawsuit filed in New York Supreme Court. Despite the ongoing litigation, Greene County insists that the group owes it and the town of Catskill $12,627.35. If that isn't paid by next year, the Maetreum will face foreclosure.

Balking at giving tax exemptions to property owned by religious organizations is a local tradition. Desperate for revenue and besieged by the many sprawling, tax-free estates of churches, monasteries, ashrams, and yeshivas, the region's town assessors tend to turn a jaundiced eye on exemption requests. Catskill Town Assessor Nancy McCoy is no exception.

"We’re not saying they’re not a religious organization," McCoy says. "We’re saying the property's use does not meet the requirement for full tax exemption."

To qualify, a religious group has to show that it is using the property primarily for religious purposes -- and that's where the Maetreum fails, she says. According to Vincelette’s report, the Maetreum is really a gender-bending housing project: "The primary purpose of the property is residential, to house and shelter transgendered individuals,” it concludes.

"I read through that document and felt strongly that they were not entitled to the exemption," McCoy says.

Platine doesn't deny that before formally becoming the seat of the Maetreum's faith, the inn was used as an emergency shelter for homeless transsexual women. (Platine herself is intersexed, and has been a transgender activist for decades.) But the inn ceased functioning as a shelter years ago, she says, and now only three people, all priestesses of Cybele, live there.

Vincelette says that the Maetreum isn't the only religious group to have its land taxed; last year, he says, the town put land owned by the Catholic church that wasn’t being used for religious purposes on the rolls as well.

"Every single religious group in the town of the Catskill is being treated the same," he says. "Unfortunately, I think there is a lot of anger on Cathryn's part. I don't think she fully understands the legal issues."

Platine says that the town's motives are anything but egalitarian. In court, she says, a lawyer working for the town told the judge that Catskill was hoping to avoid “opening the floodgates to similar groups.” That’s discrimination, she says. (Vincelette says that he doesn't know if anyone at his firm made such a statement. "If it was made," he adds, "it was being taken of context.")

Platine lets out a guffaw as she recounts how a local businessman denounced her group at a 2002 town meeting. After calling them Satan-worshippers, criminals, child molesters, and a “bunch of cross-dressing witches,” he added a coup de grace: they "harbored kittens." 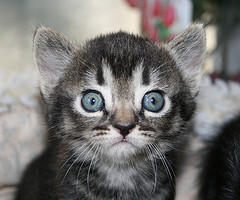 We defy you not to harbor this kitten.

So Platine made buttons plastered with the slogans “Welcome to Paganville" and "I harbor kittens" and began handing them out to neighbors. People loved them, and began coming to the Maetreum to introduce themselves.

"They were saying, ‘Don’t let these assholes run you out of town,’” Platine says.

This April, at another town meeting, Platine got the loudest applause of the night when she told U.S. Representative Scott Murphy about her tax grievances.

“We're not in Catskill -- we're in the hamlet of Palenville!” she said, as the room erupted into cheers. “We pay a huge proportion of the property taxes and we do not get services here." The local fire department was the only exception, Platine added. At that point, she says, the fire chief stood up and took a bow.

It’s clear that Catskill’s town government thinks it can’t lose a fight against the pagans. Despite the lawsuit, the town hasn't bothered to revisit its legal analysis since 2008.

But not all of Catskill's decisions are so iron-clad. This past week, the town agreed to settle a tax dispute with Wal-Mart by giving the global giant a tax break on its Catskill property.

“It was wise for us to go with the settlement, as opposed to fighting an expensive court battle," McCoy explains.

The MCMM's court battle might turn out to be just as expensive. In an opinion issued last month, Greene County Court Judge George Pulver called one of the town’s legal arguments “absurd.” The pagans' case, he wrote, could go forward.

In the meantime, Platine is putting a call out to all pagans to protest the town of Catskill. A demonstration is planned for a tax assessment grievance hearing on May 25, featuring signs reading,"Freedom of religion means all religions." As Platine posted on her blog recently, “it might not be smart to piss off a witch."

Photo of Platine from Cathryn Platine and used with permission. Photos of Maetreum by Julia Reischel. Kitten photo by Flickr user alasam.

Correction: A previous version of this article incorrectly stated that Platine's witch ancestor was burned at the stake in Salem. (See comment below.)