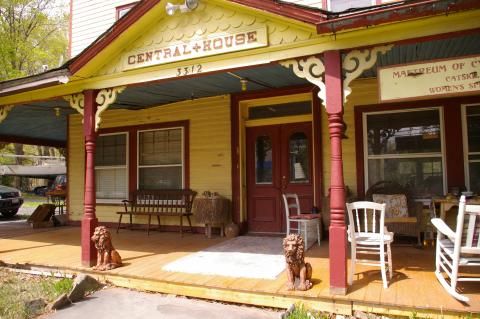 The Maetreum of Cybele, in Palenville.

The town of Catskill is appealing a judge's decision that it may have discriminated against a group of pagans by refusing to grant them a religious property tax exemption.

According the the Greene County Clerk's Office, a notice of appeal was filed on March 28 in the tax case pitting the Maetreum of Cybele, a pagan group from Palenville, against the Assessor of the Town of Catskill. The town appears to be asking for a higher court to review a tough-talking February ruling from Greene County Supreme Court George J. Pulver, Jr. in which the judge denied Catskill's request to dismiss the case.

As we reported in February, Judge Pulver's decision was a big victory for the self-described witches of the Maetreum, who argue that the town treated them differently from other religious groups when it placed their Palenville property on the tax rolls.

Pulver found that argument convincing. In his February ruling, he wrote that the attorney for the town of Catskill, Daniel G. Vincelette, attempted "to hold petitioner to a higher standard than other religious organizations."

The town's appeal has not yet been processed in the appellate court, according to the clerk's office of the Third Judicial Department of the Appellate Division of the State Supreme Court, which will hear the case. Calls to Vincelette's office yesterday were not returned.

Despite the appeal, Judge Pulver, who held a preliminary conference in the case yesterday, has set a date for a bench trial. Pulver will hear evidence in the case and rule on it himself on July 20.

Cathryn Platine, the Maetreum's spiritual leader, found out about the town's decision to challenge Pulver's ruling this week. She emailed the Watershed Post a statement yesterday:

"We are shocked the Town has taken this action rather than just admit we are, and always have been, a completely legitimate religious group that does charitable works."

More: Our collected coverage of the Maetreum's case against the town of Catskill.