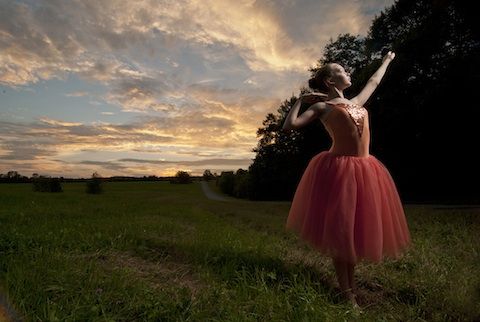 In the right light, the landscapes of the Catskills and the Hudson Valley can take on a kind of mythic quality. Mountaintops, forests, ponds, cliffs, caves—and it helps if you throw a ballerina in the mix.

That's the concept behind “The Ballet Project,” a photo series by Monticello photographer Erik Christian in which he captures his dance-inclined daughters against a dramatic variety of natural surroundings. His dreamlike images transform the Ashokan Reservoir into Swan Lake and the Neversink Gorge into Giselle's forest glade.

We caught up with Christian to talk about the project, which he’s been creating in collaboration with his kids (now 13, 10 and 7) for three years and counting. (Christian asked us not to identify his children in this story.)

Q. Where did the idea for “The Ballet Project” come from?

A. My children dance at a ballet school, and they wear these costumes. One day about two years ago, I just said, “Hey, let’s go out and take some photos. Bring your costumes.” I shot them in a bunch of locations around southern Ulster [County]. And as I was editing through the photos, I started to realize that I had a series. I decided that this would work as an ongoing thing, so I came up with the name “The Ballet Project.” We’re starting on year three now. It began as a personal project, and it’s turned into more of a creative outlet.

Below: Widow Jane Mine in Rosendale, Ulster County.

Q. How did your kids react to the idea?

A. I mentioned it to them, and my oldest one, she was really into it. And when the other two saw the photos that were coming out of it, they wanted to get involved as well. I’ll always suggest, “Hey you guys want to do it?” And some days, they just aren’t interested, so I leave it alone. And other days, they’re up for it and ask if we can go out and do a shoot.

Q. You’ve said that you want to evoke a sort of fantasy world with these shots. What makes the Catskills a good setting for that world?

A. The looks and locations you can get in this region are just so diverse. I did a lot of landscape photography in college, and I always liked the idea of creating an idealized look of a spot people might know, but have never seen in that way. My goal is that if you look at [these photos], you go, “Is it a painting? Is it a photograph?” It’s almost a cross between the two. A lot of the influence came from the Hudson River School of painting—Frederic Edwin Church, especially. I love that look.

Below: The Rio Reservoir on the border of Sullivan and Orange counties.

A. I really love the shots I did up on the Ashokan [Reservoir]. It was foggy and rainy that day, and it just looks like a painting. It looks completely different than most of the times when you’re there. That monochrome look—almost black and white with a splash of color.

Below: The Ashokan Reservoir, Ulster County.

Q. How do you go about finding spots to shoot?

A. I grew up in Plattekill in southern Ulster, and went to college at SUNY New Paltz. I enjoyed hiking and exploring the region when I was younger, so I was aware of a lot of the spots. Other than that, some word of mouth and some research to find locations that I wouldn’t normally find. But being a local helped immensely. I really love the Catskills and the Hudson Valley. It’s just a beautiful place. And part of what I want to do is just show how amazing it can be, and some of the hidden spots that people may not know about.

Q. Has the series changed over the years as you’ve taken more shots and as your daughters have grown up?

A. The poses have improved. They know the ballet positions, so I let them do that. I might suggest, “Do a different pose,” but I won’t tell them what to do. And my lighting skills have improved, and that’s given a more painterly quality to the photos.

Below: At the old stone church in Cragsmoor, Ulster County.

Q. Do you have an endgame in mind for the project?

A. I’m continuing on with the third year right now, and I’ll publish the photos from that next spring. At this point I don’t know how long it’ll go for, but I don’t have any plans to stop at the moment. I’d love to eventually make a book for my kids. I might publish it someday, but I’m not sure about that yet.