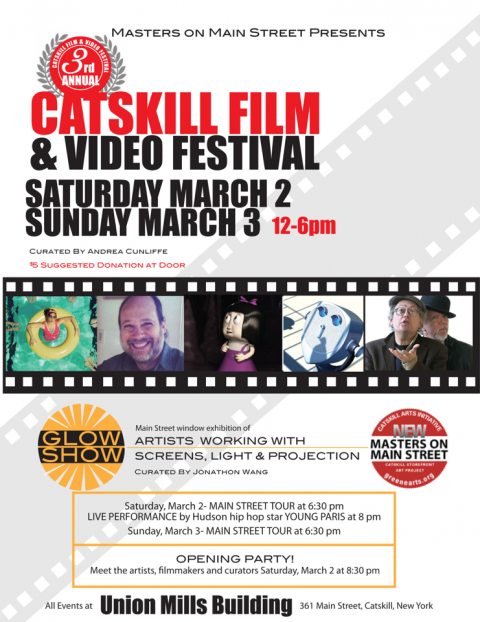 Come to Catskill on March 2 and 3 and revel in the exotic and astonishing things that happen when artists shape the light. On both days, you can watch a glittering array of fine short films -- and after dark, the storefronts of Main Street come to life in the Glow Show, a trail of video and light-based installations projected on windows and building surfaces.

Coordinator Fawn Potash of the Greene County Council on the Arts says this year’s festival benefits from the convergence of several fresh and delicious forces. The arts have been gaining momentum here for some time; the Catskill Film and Video Festival is in its third year, and the Glow Show is but the latest in the ongoing “Masters on Main” installation series. But there’s extra cause for jubilation -- the festivities are based in the landmark Union Mills building, a Civil War era gem that came perilously close to becoming an upscale condo project before being purchased late last year by Etsy founder Rob Kalin and his partner Chris Gilbert, founder of the Chocolate Factory arts hub in Red Hook.

“Ten minutes after they bought the place, I was on their case,” said Potash. “And they welcomed it. That was their whole plan anyway, to use it as a creative draw. Art is Rob’s religion; he believes that making things could save the world.”

The film festival is being curated by Germantown resident Andrea Cunliffe, internationally acclaimed as a producer, director, designer, actor and broadcaster, and three guest curators. Among Cunliffe’s picks: an adaptation of Othello set in New York City and the lunatic comedy of Mikhail Horowitz and Gilles Malkine in an existential parody, Rappin for Godot. Guest curators’ offerings include choices from Reel Teens, the Athens Animation Festival, and CineHaiti, a blend of young fresh viewpoints and professional masters.

Highlights of the Glow Show include Jared Handelsman’s “Sunscreen,” a projection based on deconstructed and remixed images of light on a flowing creek, and work by Charles Lindsay, who bears the unique title of first artist-in-residence at SETI (the Search for Extra-Terrestrial Intelligence project.)

“Every Masters on Main exhibit, people would say it would be good to have lights on in the vacant storefronts. So we decided to use light itself as the medium,” said Potash. “ It’s not narrative. It’s a whole other use of the elements.”

“Young Paris comes of African cultural royalty,” said Potash. “Andre Elombe Badila, his dad, co-founded the First National Ballet of the Congo, which is where he and Paris’ mom met -- they were living in Paris when Milandou was born. They raised a family of awesome creative kids in Hudson, and Young Paris reaches back into centuries of cultural heritage and blends it into rap. “

Sunday there will be a fresh batch of “cinematic surprises,” as the organizers put it. Potash, who’s cherished a vision of a kind and creative Catskill for over a decade, said the mojo came from all over town.

“Last year, we had to direct people to Dunkin' Donuts for coffee. This year, three restaurants are staying open and gave us all kinds of food for the party,” Potash said. “The building owners, the town DPW people -- everyone’s been great. The high school let me use their Mac lab -- turns out they have a broadcast-quality studio over there -- so I got a little in with the school, and I found a couple of young allies who’ve been doing some Facebook public relations for this."

“The whole point is to create a magnet,” Potash said. “We knew Catskill was developing its own unique persona, we just weren’t sure what would emerge. I spent years struggling just to pull shows together. The energy that’s been coming together this year -- I could fall to the ground and weep for joy. “

The film and video feast -- suggested donation a mere $5 - runs from 12pm to 6pm both days. For a complete schedule, see the Greene County Council for the Arts website.

“I Dream Too Much,” filmed in Saugerties, screens at the Woodstock Film Festival
"Welcome to Kutsher's" plays the Big Eddy Film Festival