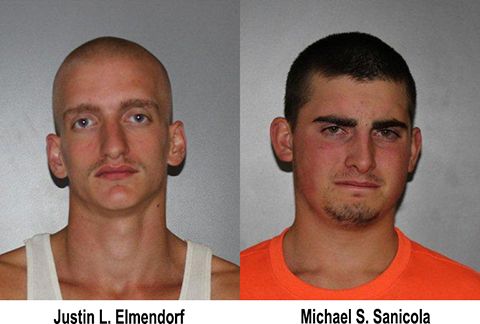 A fire at an Olivebridge home led to the arrests of two local men on Monday. Police say the two stole guns, motorcycles and other items, then set the home and its garage on fire to cover up the crime.

On Monday, state police responded to a home at 622 Acorn Hill Road in Olivebridge, and found it fully engulfed in flames. The home was unoccupied at the time, and no one was injured in the fire.

According to a statement from the New York State Police at Kingston, a police investigation found that two men had broken into the home and its detached garage, stolen property, and set the fire. Arrested were 20-year-old Justin L. Elmendorf and 18-year-old Michael S. Sanicola, both of Olivebridge. The two face charges of first-degree burglary, first-degree criminal possession of a weapon, and third-degree arson. The stolen items included a 9mm handgun, three long guns, two motorcycles, chainsaws, and other items, all of which were recovered by police.

According to Ulster County Fire/Rescue Incidents, a Facebook page that tracks local scanner traffic and emergency response, the fire was called in early Monday evening. Firefighters from Olive, Kripplebush and Accord responded, along with Olive First Aid, Mobile Life and the Ulster County fire investigation unit. Town of Olive police also assisted in the investigation.