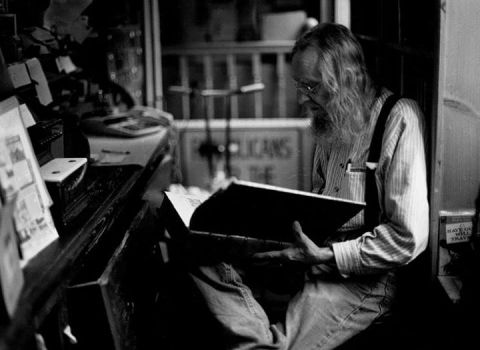 Above: H.L. Wilson in his natural habitat. Photo by Tess Mayer.

Local bookstore proprietor H.L. Wilson died suddenly on Saturday, August 17, of complications from a stroke. He was 71.

Since 1996, H.L. and his wife Linda Wilson have run (and lived in) the Bibliobarn, a lovingly curated used bookshop and bindery on a rural road in South Kortright that has become something of a legend among bibliophiles, and served as the inspiration for several other independent bookshops to open in the area.

Local artist Gary Mayer, a friend of the Wilsons who painted the "Romp of the Literati" mural at their South Kortright bookstore, wrote on Sunday after hearing of H.L.'s death: "...my wonderful friend H.L. Wilson, bookseller, humorist and political agitator and jokester...passed away last night. One of the warmest sweetest human beings I've ever encountered. H.L. and his wife Linda ran the 'Bibliobarn,' a bookstore literally in the middle of nowhere in upstate New York -- the Strand in a cornfield. A remarkable selection enriched by H.L.'s enormous charm. My favorite place to go in this part of the world. He will be sorely missed."

A Mass of the Resurrection will be held for H.L. Wilson at the Holy Innocents Catholic Apostolic Church in Halcottsville on Saturday at 10am. Bishop Frank Betancourt of Holy Innocents, where Linda Wilson is a pastor, said that H.L. -- a longtime unbeliever, happily married to a clergywoman -- had recently begun attending services at Holy Innocents in the months before his death.

"He was very much a person who called for justice and was against discrimination. He didn't see in organized religion support for those things," Betancourt said. "But he found it in our faith community. He said, 'This is the way it's supposed to be.'"

The Wilsons' plan to sell the Bibliobarn to Brooklyn's BookCourt, whose owners want to keep the bookstore running and transform the grounds into a writers' retreat, is still moving forward. Linda plans to keep a satellite Bibliobarn store open in Margaretville.

Below is an obituary for H.L., courtesy of Linda Wilson.

H.L. (Harold Lee) Wilson died in O'Connor Hospital, Delhi, New York on Saturday, August 17. He died from complications of a stroke. H.L. was born in Norfolk, Virginia on April 7, 1942.

A Mass of the Resurrection will be celebrated for him at Holy Innocents Catholic Apostolic Church, Halcottsville, New York at 10am on Saturday, August 24. The celebrants will be presiding Bishop Francisco Betancourt and Father Dante Tarantini.

H.L. is survived by his wife, the Rev. Linda Wilson, his sister and brother-in-law, Gayle and Richard Matthews and nephews Christopher and Brandon Matthews.

H.L. was a graduate of the University of North Carolina. He served as a juvenile probation officer in Virginia, Maryland and North Carolina. In 1984, H.L. and Linda opened their first rare and used bookshop in Norfolk, Virginia. After a hiatus to study handcraft bookbinding, the Wilsons opened Bibilopath Bookshop and Bindery in Norfolk. In 1996 they relocated their bookshop and bindery, Bibliobarn, to South Kortright, New York.

H.L. served in the Marine Corps Reserves during the Vietnam era.

In lieu of flowers, donations may be made to Holy Innocents Church, P.O. Box 822, Margaretville, NY. Donations will be distributed to charities supported by Holy Innocents.

Brooklyn's BookCourt plans a literary mecca in the Catskills

Romp of the Literati