Romp of the Literati 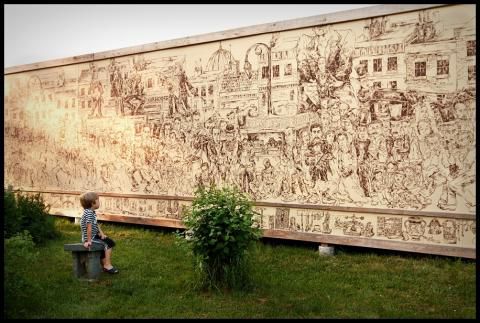 Even for the rural Western Catskills, the Bibliobarn – a bookstore run by lifelong bibliophiles H.L. and Linda Wilson – is off the beaten path. But make the trek down Back River Road to Roses Brook Road in South Kortright, and you'll find not only a treasure trove of used and rare books, but a unique piece of literary art. Behind the red barn that houses the Bibliobarn's 50,000 volumes is “Romp of the Literati,” a 40-foot long mural by local painter Gary Mayer.

“It’s a Dickensian street scene,” said Mayer. “You can see Hemingway and Norman Mailer duking it out, Charles Bukowski drinking with Dylan Thomas, Allen Ginsberg partying with William Burroughs and Jack Kerouac. Mary Shelley and Jane Austen are in a carriage. Alice B. Toklas and George Eliot are resisting pickpockets. Ralph Ellison and Yukio Mishima appear on the giant mural. In one scene Dr. Seuss is juggling in front of street kids.”

Gary Mayer: Photo by Riikka OlsonThe painting is on four-foot by eight-foot panels of cement-board. There are ten panels altogether. Mayer primed the panels with an off-white house paint, and painted the figures with outdoor paint using a fine-arts brush. Jules Verne floats overhead in a hot air balloon. Lots of bookbinding tools and other materials found in the bookstore appear in a frieze on the bottom. Mayer has also painted the proprietors into the scene: H.L. is showing seeds to Henry David Thoreau, and Linda is chatting with Marcel Proust.

Before painting the mural, Gary Mayer was a Bibliobarn regular.

“H.L. and Linda asked me if I wanted to paint a mural,” he said. “They gave me carte blanche and said they would pay for materials, so I special ordered the cement board from Curtis Lumber in Delhi and got to work. It took three or four months.”

Gary Mayer has an MFA from Maryland Institute School of Art in Baltimore. His paintings have been shown in the Bronx Museum, at Exit Art and Harm Bouckaert Gallery in New York City, at the Detroit Institute of Art, and many other galleries and art spaces. Mayer says his work is expressionist in inspiration, and he names James Ensor, Robert Colescott, Wallace and Gromit, Hieronymus Bosch, Japanese animé, and Grace Hartigan as inspirations. Mayer’s father was the art director for the Detroit Free Press from 1945-1985. His uncle is a fashion artist named John Buechel. His grandfather was a folk artist in Michigan. 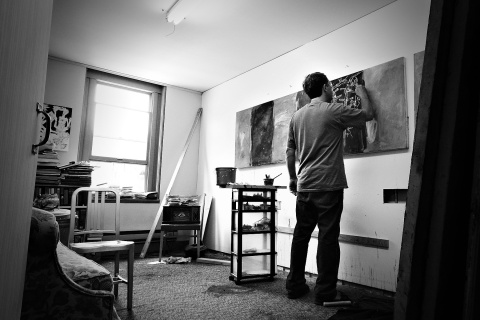 Mayer in his studio: Photo by Riikka OlsonUnlike many expressionist painters, who just want the churning surface of paint to express an emotion, Mayer likes to draw caricatures. (A talent for caricature runs in the family: Mayer's father drew editorial cartoons for the Detroit Free Press for decades, and Mayer himself regularly lampoons the well-known in his Sunday editorial cartoon for the Watershed Post.)

Mayer loves cartoons. Growing up, he used to go to the art store every week with his dad. Mayer says that when he paints he wants to get a narrative going, but he likes surprises.

Mayer's next big project will be a version of Stations of the Cross, for an independent Catholic church in Halcottsville called Holy Innocents. Linda Wilson is also a pastor at Holy Innocents Church.

The Wilsons don’t think there are any other bookstores in the world with such a mural – and it's certainly unique in the Catskills. When asked if the mural improved their lives, they laughed and said yes: water boils at a lower temperature, the garden grows better, and they get younger every day.

Kirby Olson teaches literature at SUNY Delhi and blogs at Lutheran Surrealism. Riikka Olson is a professional photographer who blogs about her work on her website, Riikka Olson Photography.