Brooklyn's BookCourt plans a literary mecca in the Catskills 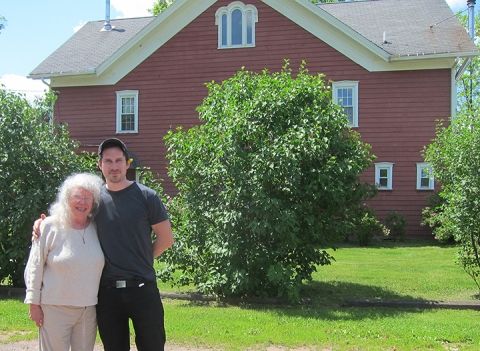 Zack Zook, the 28-year-old son of the founders of the Brooklyn-based BookCourt bookstore, wants to build the "ultimate literary destination" in the middle of a cow pasture in the Catskills. He is one of many booksellers to dream of making Delaware County, three hours north of New York City, a bibliophile's paradise.

In May, BookCourt launched a crowdfunding campaign to raise $300,000 to launch a northern outpost of its Brooklyn location, dubbed BookCourt North.  Zook asked Brooklyn-based writers and authors to pitch in to buy the barn that currently houses the Bibliobarn, a used bookstore that has occupied the 19th-century structure since 1996, and to add accommodations for writers, a cafe, regular event programming, and "writers' sheds" dotting the five acres that come with the property.

But with only a few days left before its July 1 deadline, the BookCourt North campaign has only raised about $18,000, less than 10 percent of its goal.

Zook is undeterred. This week, he said that he plans to finance the project through a more traditional loan. But the tepid reaction to his crowdfunding scheme is worrisome. Do New York City's literati really want to come to the Catskills?

A "town of books"

Zook's plan isn't the first attempt to attract bibliophile tourists to rural Delaware County. In 2005, a group of  bookstore owners in nearby Hobart decided to market their village as a "book village." As the New York Times reported at the time, the idea was based on the example of Hay-on-Wye, a "town of books" in rural Wales that attracts tourists from around the world to browse in its 30 bookshops.

The Hobart Book Village, now in its eighth year, is growing, but at a snail's pace. Officially, the village launched in 2005 with five bookstores, but only three of those were in the village of Hobart itself. Today, there are six bookstores in the village. (The newest edition, Paper Moon Bookbinding, opened in the fall of 2012.) Despite signs, banners, and coordinated advertising, some visitors passing through Hobart miss the fact that it is a book village all together.

The bookstores on Main Street in Hobart are interspersed with vacant houses (an ever-present Catskills problem), and there is only one restaurant -- the Coffee Pot -- where a visiting book pilgrim can eat. (This summer, the big news in town is that a food truck selling falafel is open on Saturdays. If it is successful, its managers may rent the empty ground floor of the former Hobart Inn.)

But Diana Adams, the co-owner of Wm. H. Adams Antiquarian Books, one of the original Hobart bookstores, says that the Hobart Book Village has gotten better every year.

"You've called at a good time, because May and June have been the best two months of our entire 10 or 12 years," she said. "There has been slow, but steady, growth."

The square footage of bookstore space in the village has grown substantially, with Liberty Rock Books opening a brand-new 5,000-square-foot space last fall.

Down the street, Barbara Balliet and Cheryl Clarke, the owners of Blenheim Hill Books, are launching a Festival of Women Writers this September in a bid to boost the book village's profile. (Registration for the festival, which will feature readings and workshops led by authors and poets like Breena Clarke, Evie Shockley, and Jewelle Gomez, opened online this week and costs a very affordable $10.)

What the Hobart Book Village lacks in tourist hype, it makes up for in small-town camaraderie: Hobart's booksellers all keep keys to each other's shops. Adams says that her fellow booksellers are in it for the long term.

"The people who are here now with these bookshops are here to stay," she says. "They always say it takes five years to break even. We figure that's if you're in Manhattan."

"The sky is the limit"

Zook has done well in the city. In 2008, he launched an ambitious plan to expand BookCourt's main location in Brooklyn. Under his direction, the store added 2,000 square feet and created an events space that has been embraced by the community. According to Zook, events take place at BookCourt almost every day.

Above: BookCourt's Brooklyn location, and an event hosted there. Photos provided by Zack Zook.

Zook is confident that he can do the same trick in the Catksills, by developing a thriving book attraction for city dwellers who want to escape to rural upstate New York. He has gotten excited responses from several Brooklyn-based writers' groups, including the Brooklyn Writers Space, the Sackett Street Writers' Workshop, and the Gotham Writers' Workshop.

"We're promoting it here, inside the Brooklyn store," Zook said. "I know we're going to have groups there all the time. People wander into our store in Brooklyn who say, 'This is great. This is so great.' These are people who obviously have houses up there. They go up in the summer, they go up every weekend."

"We want to have events going every day, or at least on the weekend," said Zook. "Events, lectures, presentations, book clubs. We want to turn it into more of a community gathering space than it is. Down the line, what we want to do is use the land and do an annual festival of some sort. It's basically like the sky is the limit."

But the centerpiece of Bookcourt's scheme is an on-site writers' retreat that could house up to 12 writers staying for weeks or perhaps months at a time.

"We want to appeal to people in New York City who think to themselves, 'If I could just get up to the barn for three days and work on this project,'" Zook said.

"We think it is," said Diana Adams. "They already have a customer base in Brooklyn and Manhattan."

"I think it's totally possible for them to be viable and a fabulous addition," said Balliet. "I think that will bring people who don't normally come. Not only the Brooklyn people; there are lots of local writers who are hungry for this kind of stuff. I think it's going to be good for everybody."

But to make it work, Zook must tap into the local Catskills literary scene as well as the city folks.

"It's a question of how you make those relationships," Balliet said. "It's not like Brooklyn where you've got thousands of people walking by. Or where an author has a whole network they can bring to an event. It's about how you build a relationship with the entities that already exist and get them to attend."

Asking your fans to give you money outright may not be the best way to make a book business grow.

Both the Hobart Book Village and BookCourt have experimented with crowdfunding. Both used IndieGogo, a crowdfunding website that allows projects to keep any money they make towards a goal.

"We're a little surprised," Zook said. "We're hoping to see a spike between now and the end of the campaign. We set the goal at $300,000, which for many people seems unreachable. If I could go back in time, I might do it differently, and only ask for $100,000."

To fund the Festival of Women Writers, Balliet and Clark launched a $10,000 IndieGogo campaign this spring. It netted them only $2,500. (They plan on relaunching the campaign this summer.)

"I think people in the book world are not necessarily tech-savvy," he said. "The whole crowdfunding concept, I think it's strange for a lot of people."

But perhaps potential funders know that BookCourt and the Festival of Women Writers have other ways to get money. BookCourt is attempting to get an old-fashioned mortgage, while the festival has received multiple grants from various foundations.

"I think crowdsourcing works for things when people don't see another way to support it," said Balliet.

The Bibliobarn, which currently occupies the barn BookCourt plans to buy, is largely responsible for Delaware County's literary aspirations.

H.L. and Linda Wilson opened the Bibliobarn in its namesake barn -- a three-story, 3,000-square-foot vaulted space in South Kortright -- in 1996. It was their improbable success at running a book shop in the middle of an empty field that inspired others to open bookshops in Hobart, which is about 6 miles away.

The Wilsons are less booksellers than book gypsies -- they live in the shop. Their tiny kitchen and woodstove are tucked into a corner near the cooking section, and their living room is a futon on the top floor.

Above: Linda and H.L. Wilson in their bookshop living room. Still from BookCourt campaign video.

They share the barn with 39,000 books, all organized according to the world's most peculiar catalog system. (A few labelled sections: "Oppressiana" -- female studies, black studies, Native American studies, and Jesus studies; the "Generally Ineffable" -- the occult, ghosts, etc; "Luddite-iana" -- diatribes against computers.)

Outside, a shed houses ten-cent "Biblio Bargains," while nearby an enormous mural depicts cavorting literary figures from history.

All this low-tech quirkiness acts as a powerful lure for literary-minded Brooklynites and New Yorkers, who make up the shop's main clientele.

"Shopping at the Bibliobarn is like poking around in the dusty crevices of a brilliant, witty person's brain — you never know what delightful, bizarre gem might reveal itself," said Alison Cherry, the Brooklyn-based author of the forthcoming young-adult novel Red (and a longtime friend of the Watershed Post). "Every time I go in, someone has to drag me out again by force."

Above: Examples of the Bibliobarn's unique organizing system. Photos by Alison Cherry.

Doing business in the middle of nowhere has lost most of its romance for the Wilsons, who are both 71. They want to be a little closer to civilization -- in their case, the Catskills village of Margaretville, where they plan to expand a satellite Bibliobarn. (They will no longer live among the bindings, but instead hope to buy a house within walking distance of the Margaretville location.)

After five years of offering the business for sale along with its complete inventory of about 50,000 books, the Wilsons had no takers. So a year ago, they put just the barn itself -- sans books -- up for sale for $260,000. That attracted some suitors, none of them bookstores.

"We really want it to stay a bookstore," said H.L. Wilson. "Several people were interested in it, but not as a bookshop."

The desire to keep books on the Bibliobarn's shelves has led the Wilsons to their partnership with Zook, the embodiment of a new generation of booksellers. Zook has been a Bibiobarn regular for seven years. He discovered it as a second-homeowner -- his parents, BookCourt owners Mary Gannett and Henry Zook, owned a vacation home just over the hill in Bovina.

By buying the Bibliobarn, Zook wants to fold the upstate bookstore's loyal customer base into BookCourt North's plans.

"Part of how we're marketing it is we want to preserve and enhance the property," Zook said. "It's been known as a destination for 16 years. It's pretty unique, I've got to say."

Above: H. L. and Linda Wilson, owners of the Bibliobarn in South Kortright. Still from Bookcourt's campaign video.

To contribute to the BookCourt North campaign, click here. The last day to give is July 1.

To contribute to the Festival of Women Writers campaign, keep an eye on their IndieGogo campaign, which will relaunch this summer.

Correction: BookCourt in Brooklyn does not yet have a cafe, but plans to install one next year. And Zack Zook has been visiting the Bibliobarn for seven years, rather than since he was age seven.