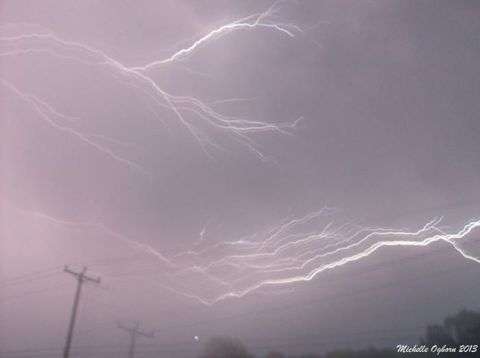 Lightning from a thunderstorm on Wednesday, May 29, taken between Grand Gorge and Stamford. Photo by Michelle Ogborn; shared on the Watershed Post's Facebook page.

A fierce rainstorm that swept through upstate New York on Wednesday night caused flash flooding in several spots in the Western Catskills, as the heavy rains swelled small creeks and ditches.

Parts of Delaware and Schoharie County, where the rainfall was hardest, got over two inches of rain over the course of the two- to three-hour storm. According to data from the National Weather Service, the Schoharie County town of Jefferson had 2.4 inches. In the hamlet of Meridale, just outside of Delhi, rainfall was reportedly 2.25 inches.

The West Branch of the Delaware River also overflowed its banks in some spots. But the flash flooding from smaller creeks as they were overwhelmed with rainfall caused more problems than the rise in larger rivers, according to Richard Bell, director of Delaware County Emergency Services.

"The ditches, the small feeder streams weren't able to handle it. That's what caused most of the damage," Bell said. "They took a lot of rain in a short time."

Several roads were closed during the storm, Bell said, including County Route 18 near Fitch's Bridge in Delhi. The area is a frequently flooded spot, where two twin babies were drowned in 2003 after the car they were riding in was swept away.

Water was also flowing over the road on Route 10 between Delhi and Hamden, Bell said, bringing the road down to one lane.

No roads are currently closed in the county, Bell said, though many sustained minor damage.

"There's a lot of shoulder work to be done and repair work," he said.

Southern Schoharie County wasn't so lucky. According to a report from the Daily Star, flooding washed out a bridge in Gilboa:

in Gilboa, Schoharie County, near the border of the Delaware County town of Stamford, flooding washed out a single span bridge at Starheim and Shew Hollow Roads, according to Schoharie County Sheriff Tony Desmond.

He said Schoharie County highway department officials were responding to the damage there. They could not be immediately reached for comment. There were no reports of injuries.

In a post on Facebook, Pure Catskills reports that several farms in the area along the West Branch sustained flood damage:

Our thoughts today are with those farms impacted by last night's storms. Throughout our region, farmers are pulling on their mud boots and heading out to deal with the implications of flash flooding on their fields and farms.

Did you have flood damage from the storm? Let us know with a comment below, or email us at [email protected].

Below: Imagery of rainfall over a 24-hour period beginning at 3:46pm on Wednesday, May 29. Source: National Weather Service.