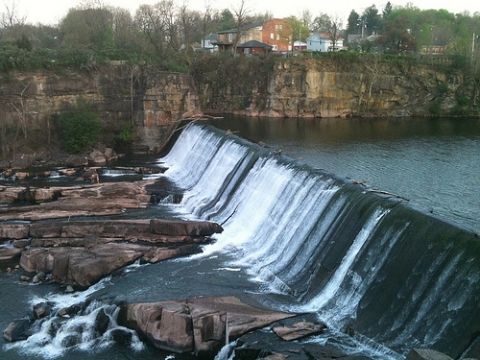 On Wednesday, September 25, state environmental officials announced that a deal had been struck with New York City, in a long-simmering controversy over the city's release of muddy water from the Ashokan Reservoir into the Lower Esopus Creek. But the consent order that governs the deal was kept under wraps until the city comptroller signed off on it, angering local officials who criticized the state DEC for not releasing the full document immediately.

Today, communities along the Lower Esopus get their first look at the document, which went into force this morning after being signed by both the New York City comptroller and the DEC commissioner. The DEC released the full text of the consent order today, along with a list of frequently asked questions about the agreement.

The DEP will have to pay fines to the state if it violates any of the agreements set out in the consent order. Among the 34-page consent order's conditions:

-The DEP will pay a fine of $2,740,000 for past environmental violations. Of that, $2,640,000 will go toward environmental projects, including stream projects in the Lower Esopus, fish stocking, and the installation of stream gauges.

-The DEP will be required to conduct a study of the environmental impacts of the current turbidity control system. In the study, the city must compare the environmental impacts of turbidity on the Lower Esopus to those of alum settling at the bottom of the Kensico Reservoir. The city must also study alternatives to the current system, such as discharging turbid water from the Catskill Aqueduct before it enters the Kensico. Public hearings will be held to get input from residents on the scope of the study and its conclusions.

-From October 14 through March 15, the city must leave 10 percent void space in the Ashokan Reservoir to guard against downstream flooding, if it can be done without compromising New York City's water supply. While releasing water to maintain the voids, the city must consider requests from Ulster County to alter the release schedule if it impacts agriculture or recreation downstream.

-The Interim Release Protocol, an agreement previously hashed out between the state and city, is now enforceable, and the DEP cannot violate it without the DEC's consent.

-By the end of August, 2027, the DEP must begin dredging the Kensico Reservoir, whose bottom is covered with a sludgy layer of "alum floc," a mix of alum and particles that have stuck to the alum and settled out of the water.

The DEP makes three kinds of water releases into the Lower Esopus via the Ashokan Release Channel. There are so-called "community releases" of clear water, which raise water levels in the creek and provide water for fish and recreation. When heavy rainstorms are in the forecast, the city makes "spill mitigation releases" ahead of the storms, aimed at reducing the risk of flooding downstream. The third, and most controversial, releases are the "operational releases" made after heavy storms, which shunt silty water out of the Ashokan Reservoir's west basin and into the Lower Esopus. The city began making the releases in 2010, partly in response to a DEC directive to reduce the use of a settling agent called alum further downstream in the system.

Since the aftermath of Hurricanes Irene and Lee in 2011, when storms overwhelmed creeks across the Catskills with silt and debris and the city flushed millions of gallons of turbid water into the Lower Esopus, the DEP has not made any operational releases into the creek, said spokesman Adam Bosch.

"There is the impression of ongoing muddy releases. The releases are not ongoing," Bosch said. "We have not made a single operational release because of turbidity since releases from the hurricane. Water quality since then has been excellent."

But the consent order does not rule out the prospect of future silty releases. If major storms visit the area again, the city will be allowed to release turbid water into the Lower Esopus once more.

The consent order does impose new limits on how long the city can discharge turbid water for. From November through April, if the water being released into the Lower Esopus is at a turbidity level between 30 and 60 NTU -- between six and 12 times the standard for drinking water, which is 5 NTU -- the city can only make releases for 12 days in a row. If the turbidity is between 60 and 100 NTU, the city can only release for five days in a row.

If the turbidity level of the releases rises above 100 NTU -- which it did after Irene and Lee -- the city is only allowed to release turbid water when the water flowing into the Ashokan Reservoir from the Upper Esopus Creek is similarly muddy.

During the summer months, the consent order's limits on turbid water releases are stricter.

The DEC often issues consent orders in cases of environmental pollution. They are legally binding documents that both parties agree to in order to avoid further civil or criminal legal action. Most of them are drafted internally, without input from the public. But in this case, because of the broad public interest and controversy surrounding the Lower Esopus issue, the DEC held a public comment period and a hearing on an earlier draft of the Lower Esopus consent order in June of 2012. The hearing drew dozens of angry Lower Esopus residents who testified that the DEP's muddy releases had hurt the creek and local property values.

Over a year elapsed between the DEC's release of the draft consent order and the final version, a source of much frustration in communities along the Lower Esopus. When another critical state document governing the New York City watershed was released in August -- a draft midterm revision of the city's Filtration Avoidance Determination (FAD), by the state Department of Health -- the DEC's consent order had not yet been released, enraging local officials who felt they could not properly evaluate the FAD without knowing what was in the consent order.

Public comment on the FAD has been extended, and will run through November 15, 2013. To submit comments on the FAD, send them to NYSDOH Attn: Pamela Young, Empire State Plaza, Corning Tower Room 1110, Albany, NY 12237. Comments can also be emailed to [email protected].

Below: Reactions from local officials and other stakeholders to the consent order. If you are a local resident along the Lower Esopus and have comments on the consent order, feel free to share them with us at [email protected].

"I have continued to advocate for public release of the Consent Order and I am pleased that the NYSDEC has been responsive to my request,” said Ulster County Executive Mike Hein. “Having the Consent Order available in conjunction with the Filtration Avoidance Determination (FAD) public comment period allows the residents of Ulster County to have access to important information necessary to fully evaluate the proposed activities of the DEP. It is my great hope that they will share their opinions during the public comment period which we announced earlier this week has been extended. As always, we will continue to fight to protect the interests of the 183,000 residents of this amazing County."

The release of Consent Order came amid public pressure from County Executive Hein, River Keeper and numerous elected officials amoung others. The Consent Order was released prior to the conclusion of the public comment period for the New York State Department of Health’s proposed extension of the FAD.

March Gallagher, chief strategy officer at Hudson Valley Pattern for Progress and a Rosendale resident, wrote to us saying that she feels the penalties imposed on New York City are too low:

I think that the penalties in the consent decree are too low.

This type of Clean Water Act violation can result in penalties up to $37,500 PER DAY. The $2,740,000 penalty assumes only 73 days of discharges or a much smaller fine level. I believe that there were 110 days of releases between initial discharges which started October 7, 2010, and the adoption of the interim protocol in October 2011. That would be over $4m in penalties. Furthermore, penalties should directly benefit those who were injured to address things like failed septic, damage to fish stocks, and the municipalities such as Saugerties and Marbletown that lost recreational resources during turbid releases.