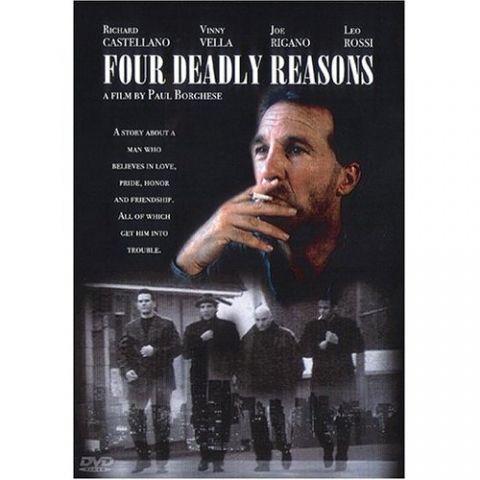 Above: Four Deadly Reasons, the film that sparked a Hollywood-worthy furor in the little Sullivan County hamlet of Narrowsburg over a decade ago.

Regular listeners of This American Life, a national radio program from Public Radio International, heard a local legend last week: The story of how the little Sullivan County hamlet of Narrowsburg fell for a smooth-talking two-bit actor named Richard Castellano, and let him walk off with tens of thousands of dollars in exchange for a few empty Hollywood promises.

In the January 18 show -- a repeat that first aired in 2000 -- producer Alex Blumberg talks to locals about how Castellano convinced a whole community to believe that he would put Narrowsburg on the path to movie stardom:

In the beginning, everyone seemed happy to have a little Hollywood. The town got a charming celebrity with bad boy appeal. The celebrity got an adoring public. Richie opened an acting studio, The Richard Castellano School of Acting, and 42 people signed up for his classes. He and his wife also organized the ambitiously named First Annual Narrowsburg International Independent Film Festival. He said Narrowsburg would soon become the Sundance of the East. But, most exciting, he planned to shoot a movie in Narrowsburg, a gangster picture. Richie himself was the lead. People from the town would fill out the cast.

Along the way, Blumberg recounts, Castellano cut a swath of broken promises through the community -- from promised roles in the film that never materialized, to paychecks that bounced, to loans that were never repaid. In 2001, Castellano pleaded guilty to four counts of attempted grand larceny for scamming people out of thousands of dollars for Screen Actors' Guild cards that were never awarded, and was sentenced to a year in Sullivan County jail.

Incredibly enough, the movie, Four Deadly Reasons, was eventually finished, with its star and chief backer still in jail. The River Reporter wrote in 2002:

The story of how [director Paul] Borghese pulled it off is remarkable. Funding was an issue, as Castellano, who experienced legal and financial difficulties, couldn’t come up with money to pay the crew or postproduction costs.

Borghese, who played the role of Yogi Berra in the film “61” about the New York Yankees on HBO, got a Wall Street friend to agree to pay the lab bills and postproduction costs.

“In return, Castellano agreed to turn over the movie to me,” Borghese said.

When Borghese saw the footage, he realized he didn’t have a complete movie yet.

His star was out of circulation, confined to the county jail in Sullivan County. Borghese went to work using technical tricks and beefing up the role of a major character, Anthony Aciervo, who played Petie Ventuti, Castellano on-film brother.

“It was a remarkable feat,” said editor Sandra Consentino. “He couldn’t have been more insightful as to what the movie needed.”

Over a decade after it first aired, the Narrowsburg segment from This American Life is still a ripping yarn, and can be heard online at the program's website.

We can't resist nipticking, though: Why is it so hard for out-of-town media outlets to understand how rural government works? Blumberg, at pains to get across how tiny the hamlet of Narrowsburg is, tries to explain:

Dick Crandall is the supervisor of Narrowsburg. Supervisor's what you call a mayor when a town's too small to have mayors.

Sorry, Alex: Crandall was the supervisor of the town of Tusten, and "supervisor" is what you call the top elected official of a town in rural New York State, no matter how big or small the town is. Cities and villages have mayors -- and some villages are even smaller than Narrowsburg. (For instance, there's Bloomingburg, a Sullivan County village with 420 people.) It's a lucky break for This American Life that Castellano didn't decide to set up shop in the hamlet of Callicoon -- confusingly located not in the town of Callicoon, but the next town over, Delaware.

“I Dream Too Much,” filmed in Saugerties, screens at the Woodstock Film Festival
"Welcome to Kutsher's" plays the Big Eddy Film Festival