A tribute to a departed Andes resident, Catskills style 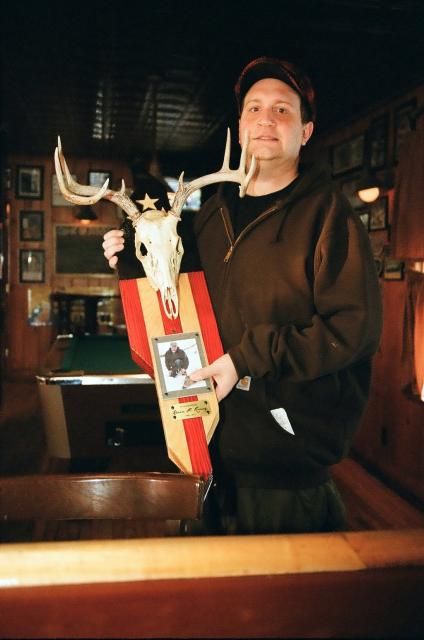 Above: Peter Ames posting with his memorial to late Andes resident Kevin Roney, which was installed in the Andes Hotel tavern on January 19, 2012. Photo by MJ Donnelly.

A year ago today, Kevin Roney died. Roney was a beloved fixture in the town of Andes -- his obituary in the Daily Star describes his distinguished military record, his passion for partying with his Andes friends, and his pet project, the construction of the "largest tool shed" in Delaware County.

In a small town, a man like Roney is remembered and celebrated for a long while. Yesterday, Peter Ames, an Andes resident who makes his living doing web design but has a well-developed artistic side, unveiled a memorial he made in Roney's honor on the wall of the Andes Hotel.

This memorial really has to be seen in person to be fully appreciated. (MJ Donnelly sent us a few photos of it, which we've posted here.) It's the skull of a deer Roney shot before he died, painstakingly stripped of its flesh by Ames' crew of flesh-eating dermestid beetles. A photo of Roney with the deer is below the skull, along with a little brass plaque featuring Roney's signature.

All that is mounted on a wooden plaque made in the shape of an American flag, symbolizing Roney's patriotism. (In addition to working as an air traffic controller in the Navy for decades, Roney spearheaded Andes' annual installations of flags on Main Street around the Fourth of July.)

Finally, in a nice touch that helps the memorial fit into its surroundings on the wall of the Andes Hotel's tavern, the whole thing is backlit by remote-controlled LED disco lights that pulse from color to color. We're sure that Roney would have approved.

Tried and true: Catskills restaurants with staying power
On the Cooking Channel: Eels, reels and O'Neills

Andes: Not such a honky-tonk town, says the New York Post