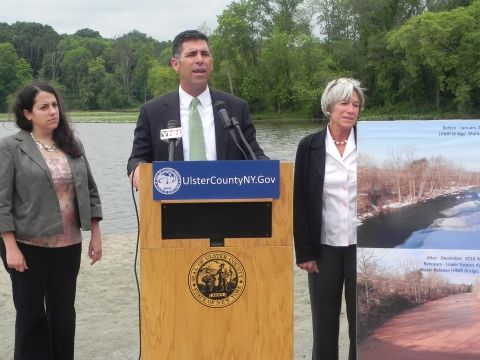 Above: Ulster County executive Mike Hein, with Ulster County Department for the Environment Coordinator Amanda LaValle and Riverkeeper's Kate Hudson, at a press conference on the Draft Consent Order held at the Saugerties Beach last month. Photo courtesy of the Office of the Ulster County Executive.

Ulster County has submitted official public comments to the state about a new draft plan to govern New York City's turbid water dumping in the Lower Esopus. To no one's surprise, Ulster County isn't too happy with the plan.

"The abuse of Ulster County by the New York City Department of Environmental Protection (DEP) is Mayor Bloomberg’s 'dirty little secret,'" Ulster County executive Mike Hein wrote in a press release about the comments today. "It is obvious that he cares more about 16 ounce sodas in New York City than he does about the 600 million gallons of highly turbid dirty water he allowed to be dumped on the people of our community for hundreds of days, including every day for almost 4 months straight."

Ulster County has submitted two letters to the state DEC. The first, sent on July 10, is about property owners along the Lower Esopus who are bearing the brunt of the impacts from the city's muddy water releases. The second, sent July 13, speaks to Ulster County's legal concerns about the draft consent order.

In their comments, Ulster County also included a sheaf of raw data from interviews with property owners in the summer of 2011 that show the impacts from the releases.

In the July 10 letter, county attorney Beatrice Havranek writes that the damages from New York City's releases from the Ashokan Reservoir into the Lower Esopus include:

erosion of stream banks, septic failures, dock and stream access damages, structural damages, debris removal damages, and other miscellaneous damages. The proposed Order on Consent contains nothing that addresses these damages or the monetary costs associated with these damages as suffered by property owners.

The county is asking that New York City and the DEP set aside funds for compensating local property owners, and set up a schedule so that the city will respond to claims promptly. (Homeowners in Wawarsing, who have been waiting decades for compensation from the DEP for the flooding of their homes from below, will understand the importance of that provision.)

The second letter makes an even more ringing demand: That the city provide funding and benefits to Lower Esopus communities, just as it does for the towns and residents in its watershed towns. Havranek writes:

The county is also asking for compensation for harm to local recreational activities; an independent technical review consultant for the Ashokan Releases Working Group, not beholden to New York City; no credit under the draft consent order for the DEP for environmental benefits the agency is already commited to; more transparency during the process; additional permit requirements for water releases; and more.

The federal Environmental Protection Agency has also weighed in on the plan via public comment. In a letter sent to the DEC on July 11, the EPA's Jeff Gratz asks that all Lower Esopus releases, except for flood mitigation and community releases, be halted under the Interim Protocol that now governs releases. The letter also asks that New York City be required to study alternatives to Lower Esopus turbid water dumping.

This is a change of heart for the EPA, Gratz writes:

After the approval of the turbidity control plan, historic floods caused adverse turbidity conditions in the Catskill region and resulted in prolonged use of hte Ashokan release channel and turbid conditions in the lower Esopus Creek. These severe weather conditions, which may occur with more frequency, have caused EPA to reconsider its position regarding the use of the release channel, and we are recommending that NYSDEC revise the interim protocol to eliminate the provision for operational releases...

There's a lot of detail in these letters, and if you're an Ulster County resident -- especially if you live along the Lower Esopus -- we encourage you to read them (follow the links in the text above) and let us know what you think. Leave a comment via Facebook below, or contact us at [email protected].