His kingdom for a gas can: Liberty auto store manager tracks down a precious commodity 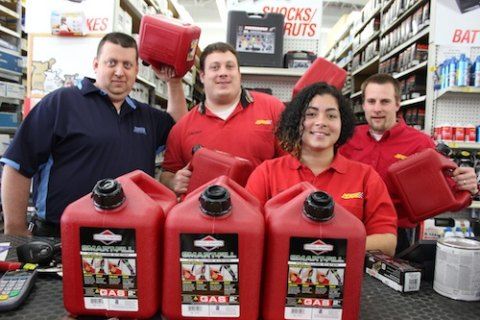 Above: Manager Brian McDonald (left) of Advance Auto Parts in Liberty and his staff tracked down gas cans – a hot commodity across the tri-state area. Photo by Jason Dole.

Last week, if people in Sullivan County were concerned about anything at the gas pump, it was the cost of fuel. Now, as worries rise about the availability of fuel, even gasoline containers are becoming scarce.

“You can't get a gas can from West Hazleton, PA to Binghamton, down through the Tri-State area,” said Brian McDonald, Manager at Advance Auto Parts in Liberty. McDonald would know. He's been driving around looking for gas cans while his staff has been making calls and searching online for wholesalers and even other retailers who are in stock.

McDonald eventually found a cache of two-gallon cans up in Norwich, NY, and ordered 150. He brought the first batch back to Liberty himself around 3pm. The bulk will arrive this evening.

“They're going to show up at 7pm,” said McDonald. “And as long as people know they're here, they're gonna fly. People are buying three or four at a time.”

One customer waited while a picture for this article was taken. He bought four gas cans.

“I'm going down to New York [City],” said the customer, wishing only to be identified as George. “I want to make sure I have enough to get back. Apparently, there's no gas.”

In a scenario that's being played out thousands of different ways in Sullivan County and other places with close ties to the metropolitan area, something as commonplace as a commute to the city now requires serious planning. When it comes to gas, diesel, and the containers to put them, it also requires a little extra searching, driving, and spending.

That's where retailers like Brian McDonald come in. Without the aid or input of corporate headquarters, he started tracking down the things local folks need. This includes generators, which McDonald was eventually able to find in West Hazleton.

“I put six generators in my Ford Fiesta and drove 150 miles from Pennsylvania,” explained McDonald. He secured ten generators in all this afternoon, and three of them sold in less than 25 minutes.

When it came to fuel containers, McDonald knew there was a need without the customers even saying anything. He had two relatively expensive gas cans specially designed for boat use. Even at $70 a pop, they were gone. And the few red plastic buckets he was able to bring in this afternoon were going out the door almost as quickly as they came in.

“It's so we can help the community,” added McDonald. Of course it's good business, too, but there's no need to be cynical about it. Folks stopping by Advance Auto certainly aren't.

“I had some customers trying to hug me over the gas cans,” said McDonald.

Below: Employee James Curry puts up a sign advertising this evening's gas can sale at Advance Auto Parts in Liberty. Photo by Jason Dole. 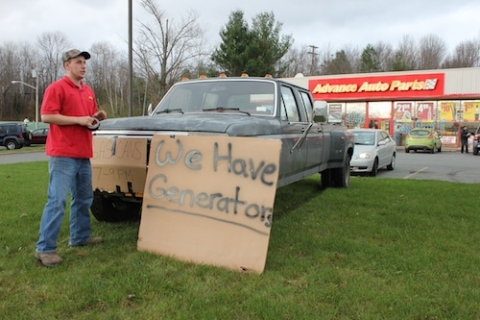 How will you spend $3 million in flood money?
Sandy victims get another extension on FEMA deadline
Cuomo and Christie blast House GOP over failure to pass Sandy bill
FEMA deadline for Sandy aid postponed until January 28

Olive firefighters help their downstate brethren dig out after Sandy