Olive firefighters help their downstate brethren dig out after Sandy 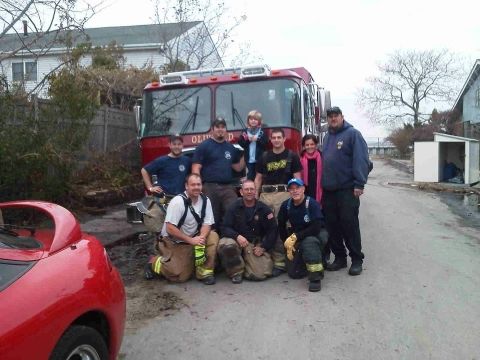 Chris Winne, the chief of the Olive Fire Department, sent these photos last week of a trip five Olive firefighters made to Long Beach, New York, to help out firefighters whose neighborhood had been slammed by Hurricane Sandy.

The Olive contingent camped out in the Long Beach firehouse and answered fire calls for the local firefighters over three days in mid-November.

When they weren't on duty, the Olive firefighters and a crew of firemen from Greenport helped two firefighter families rip water-damaged sheetrock out of their homes.

"In betweeen, we talked to some of the firemen who had stopped by to check on us at the station," Winne said. "We asked them, 'Do you need help?' Every house is damaged. They said, 'Yeah. We've got to do some demolition in order to get stuff out.' We were like, 'Let's go.'"

Below: Olive firefighters pose with firefighters from Greenport in front of another Long Beach home they helped clean up after Sandy.

Two crashes, one fatal, on Route 28 in one day
Town of Olive declares state of emergency; makes hotline; designates shelters

The truck that chicken dinners built