The truck that chicken dinners built 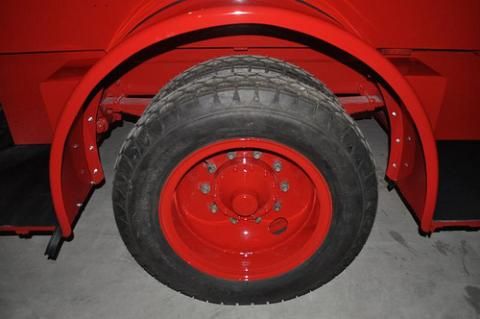 Top: The new tires on "The USA," Olive's vintage fire truck.  Above: A slideshow of photos of "The USA" on Flickr, courtesy of Ralph VanKleeck Jr. Click the photos to view the captions.

Bringing a vintage 1936 Holabird fire truck owned by the town of Olive back to life has been Ralph VanKleeck Jr.'s mission ever since 2008. Four years later, after many hours spent in the garage tinkering with the truck itself and many more hours spent fund-raising for its restoration, VanKleeck got his wish.  The Holabird, which the fire department affectionately calls "The USA," made its public debut during West Shokan's Memorial Day parade this past May.

"The USA" was Olive's first fire truck. Bought by a group of private citizens in 1947 from a US Army surplus sale, the truck was there when the fire department was founded. It was used until 1959, when it broke down.

But the Olive Fire Department never got rid of it, and in 1997 the fire department and local citizens began planning its comeback. The engine needed to be completely rebuilt, and new antique tires needed to be tracked down. Over the years, the department has raised $120,000 for pay for the truck's repairs, thanks for donations and the proceeds of many years of its annual chicken barbecue.

VanKleeck became chairman of the Olive's fire truck restoration committee in 2008. He took up the project partially because being an Olive fireman is in his blood. His father was a member of the town of Olive's fire department for over 30 years, and VanKleeck himself, now the captain of Olive Fire Department No. 2 in Shokan, has been a member since he was 16 years old.

He's also a lifelong mechanic and tinkerer, like his father before him, so spending time under the truck's hood was a natural. But mostly, he was seized with the desire to see the project finished and the truck running.

We talked with VanKleeck about the finished fire truck last week. Here's our interview.

Watershed Post: Why did the Olive Fire Department decide to rebuild the fire truck?

Ralph VanKleeck Jr.: We just thought it would be a great piece of history for the fire department and the town.

WP: How much did it cost, and how long did it take?

RV: We have $120,000 invested in it. It was all done by fund-raising and donations. It’s been since 1997 that we’ve been doing different things on and off. In 2003 we had the engine rebuilt. We took it to a place in Albany that completely rebuilt the engine. In 2008, we got it running, and then it went to a body shop in Hyde Park,where everything was totally taken apart and sandblasted and repainted. We got it back in May 2011. We had quite a time finding tires for it. We finally found a place in Ohio that had some. It's a real rare size, and they're expensive. It ended up being $4,300 for just the six tires.

WP: Why were you so into this project?

WP: So how was it when "The USA" finally got to go out?

RV: We took it to the Memorial Day parade in May in West Shokan -- that was its first time out. People just thought it was wonderful. Townspeople have been hearing about this for years, because of all the fundraisers and raffles, but they could never see the truck -- and now they can see the truck. They could see what their money went to. It made a lot of people proud to see it out and about again. One of the original firemen who rode on it [in the 1950s] rode on it in the parade. ate 80s or early 1990s.

V: Just regular gas. The gas gauge doesn’t work, and I’ve only filled it up once the little bit we’ve run it. It will probably only do 40 miles-per-hour top speed  -- it’s not something you want to drive on the highway.

Below: "The USA" on its first drive, during the 2011 Memorial Day parade in Shokan. 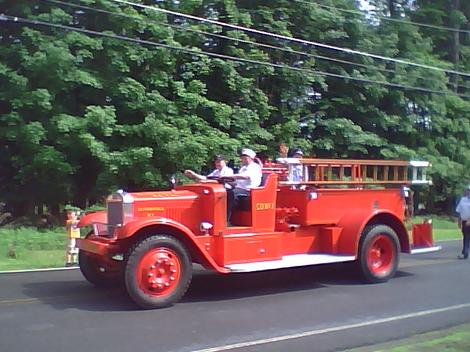 Two crashes, one fatal, on Route 28 in one day