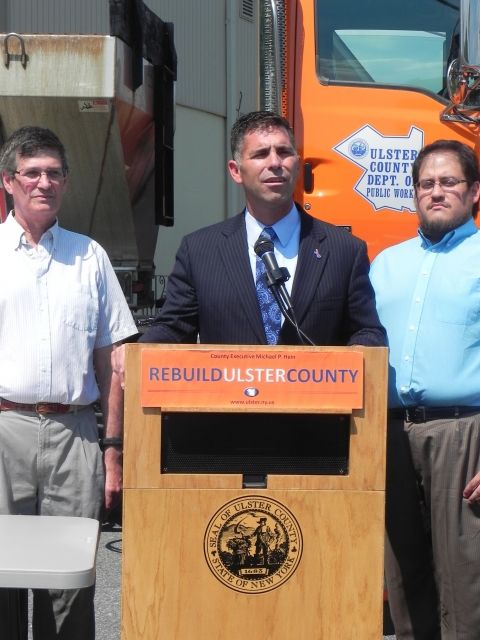 Today, Ulster County Executive Mike Hein signed into law a bill by the Ulster County Legislature banning the use of "frac brine" -- the wastewater that is a byproduct of hydraulic fracturing -- as a de-icer on county roads.

The bill was passed by the county legislature in July. Earlier in the year, Hein also issued an executive order banning the use of frac brine on county roads.

In addition to banning the use of brine on county roads, the law requires bidders on relevant county projects state that fracking brine is not used, and imposes both civil and criminal penalties on violations of the ban. If convicted under the law, contractors that spread brine on county roads could face fines of $25,000 per incident and up to 15 days in jail.

The law defines "brine" as wastewater generated from natural gas wells by processes "including but not limited to High Volume Hydraulic Fracturing," indicating that brine from conventional gas wells may fall under the ban as well. The New York State Department of Environmental Conservation currently does not allow the spread of brine from hydraulic fracturing, but it does permit the spread of brine from conventional wells under a so-called Beneficial Use Determination.

From a press release issued today by Hein's office:

“I am pleased that Ulster is the first county in the state to act responsibly on this important environmental issue,” said Ulster County Legislator Ken Wishnick.  “Several local governments in central New York have already been enticed into obtaining so-called free road deicing waste water from the gas industry, but the Brine Prohibition Act ensures that it does not happen here.  I congratulate the legislature's Environmental Committee for its hard work, the environmental community for coming out to meetings en masse and offering solid suggestions to strengthen the law, the entire legislative body for approving it unanimously and County Executive Hein for signing it into law.”

According to Ulster County Legislator Hector Rodriguez, "Prohibiting fracking brine on county highways is a major first step forward in the struggle to protect our environment.  It was my great honor to work with County Executive Hein and Legislator Wishnick on this important initiative.  Fracking is the greatest threat to our drinking water this decade and we will look at further legislation to protect our citizens."

Below: The text of Ulster County's law prohibiting the spread of frac brine on county roads.