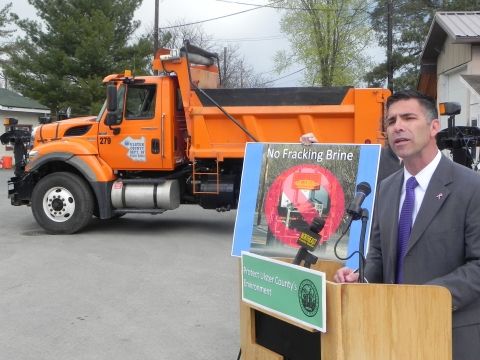 Mike Hein announces an executive order banning the use of frac fluid by any county department. Photo courtesy of the Office of the Ulster County Executive.

Ulster County executive Mike Hein issued an executive order today to prevent the spreading of brine from hydraulic fracturing on any county-maintained roads.

The executive order bans "the purchase of any liquid waste product from hydraulic fracturing operations (fracking waste brine) or the use of such fracking brine by any part of Ulster County government." The ban does not apply to town or state roads in the county.

The frac fluid spreading ban is Hein's second executive order since taking office in 2009. Hein's first executive order, in 2010, was an official ban on nepotism in hiring for county jobs.

The use of brine from hydraulic fracturing wells (and conventional gas wells) has become a hot issue in the region recently. The salty, toxin-laced wastewater from gas wells can be used as a cheap replacement for road salt, allowing gas companies a way to dispose of frac fluid without trucking it long distances to wastewater treatment plants.

Although the New York State Department of Environmental Conservation currently does not allow brine from hydraulic fracturing operations to be spread on roads in the state, the DEC does permit the spreading of brine from conventionally-drilled wells and other activities.

On April 17, the Ulster County Legislature is slated to hold a hearing at Ulster County Community College to discuss a proposed law banning the use of fracking brine on roads in the county.

A similar proposed ban was defeated in Otsego County in February, when it failed to pass the county's Natural Gas Advisory Committee:

The resolution was pitched by freshman Rep. Beth Rosenthal, D-Roseboom, who argued that spreading toxin-laced brine from tanker trucks poses an environmental hazard to humans and animals.

But most panel members said they weren't convinced there was a scientific justification for banning brine spreading or did not have sufficient information on the topic to move to prohibit its application. Some said they saw no reason to enact a prohibition, given that the county Highway Department has not been using brine for dust, snow or ice control.

Kingston, N.Y. – Ulster County Executive Mike Hein today issued Executive Order Number One of 2012, which will ban the purchase of any liquid waste product from hydraulic fracturing operations (fracking waste brine) or the use of such fracking brine by any part of Ulster County government.  This Executive Order is designed to compliment the Ulster County Legislators current proposed Local Law No. 1 of 2012.

“This action is in accordance with my long standing concern for the environment and my profound concerns regarding hydrofracking,” said Ulster County Executive Mike Hein.  “I cannot underestimate the importance of clean water to both the environment of Ulster County and to the health of our citizens. This Executive Order will send a clear message to the gas industry that the health and welfare of our citizens is not for sale.   This Executive Order will compliment the Legislature’s proposed Local Law and I applaud my colleagues for their commitment to protect the land that we all love so much.”

“I implore, for the safety of our County and the protection of our water for future generations, that the Legislature quickly move forward with a local law to outlaw the use of fracking brines,” continued County Executive Hein.   “I anxiously look forward to a time when I can sign such legislation.  I firmly believe fracking brine has no place in our County.”

Ulster County Legislative Minority Leader Dave Donaldson said, “This type of coordination and collaboration is exactly why we transitioned to this new form of government.  The County Executive’s Order in addition to the proposed Local Law will protect our residents and send a clear and timely statement to the gas industry.”

Legislator Peter Loughran said, “The health of our children cannot be compromised.  This action is a substantial first step in limiting the potential hazardous effects of Hydrofracking.  I commend County Executive Hein for stepping out in front of the issue.”

Legislator Don Gregorious said, “My constituents are speaking in one singular voice that we do not support hydrofracking and I am extremely grateful that Ulster County’s government clearly is speaking with the same level of unity.”

Legislator Hector Rodriguez said, “Allowing the use of this type of materials on our roadways is ‘pennywise and pound foolish’.  I am happy to see that the Legislature and Executive are in agreement that we must protect our residents from the dangers of Hydrofracking.”

Legislator T.J. Briggs said, “This Executive Order sends a very clear and specific message to the Hydrofracking industry, that until we are absolutely certain that their products are 100% environmentally safe, they are not welcome in Ulster County.”