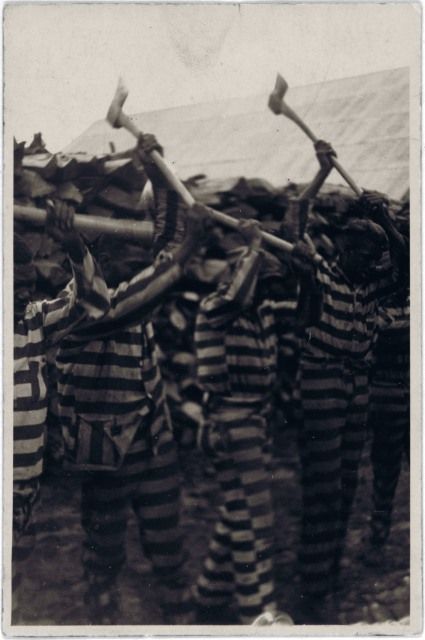 Above: Photo of prisoners working on a South Carolina chain gang, taken in 1934 by Alan Lomax. Source: Wikimedia Commons.

Update, 7/19: Sheriff Tom Mills has written a very thoughtful response to the story below. Click this link to read it.

File under: We Wish We Were Making This Up.

Several days ago, the Watershed Post received a press release from the Delaware County Sheriff Thomas Mills about the department's inmate work detail program, under which they farm out inmates from the Delaware County Correctional Facility to work for local towns, villages and school districts. (Confession: We're a small office, we get a lot of press releases, and we didn't get around to reading it until today.)

The first two paragraphs speak for themselves:

If any of you have had reason to travel in the Binghamton area on a regular basis, you have probably grown accustomed to seeing orange-suited work details picking up debris from along the major roadways. It is a moving sight to see for the first time. Like many, this sight reminded me of passing chain gangs of prisoners many years past in the rural south.

Many of your [sic] have probably thought to yourselves, "Why don't we do that?"

For many Americans, chain gangs are a powerful symbol of slavery and the Jim Crow South. But New York State isn't exactly Alabama -- despite the Confederate flags you do run into on a regular basis in Delaware County -- and most of us aren't too well-versed in the history of the post-Civil War South around here.

In that case, here's a reminder, from Yale law professor Tracey Meares.  In 1996 -- just a few months before an Alabama court put an end to a 1990s revival of chain gangs, with the settlement of the case Austin v. James -- Meares wrote an essay arguing that a company should not be permitted to trademark a "chain gang" symbol. An excerpt:

At the beginning of this century the chain gang was used to keep African Americans in servitude after Emancipation. Contract-enforcement laws-- directed primarily at African-American farm laborers--transformed contractual obligations into involuntary servitude by imposing criminal sanctions for a laborer's breach of an employment contract. These laborers had a choice: They could work out the contract or spend several months of forced, brutal labor on a chain gang, where death was not uncommon. The historical connection between chain gangs and slavery is well-entrenched in the minds of most Americans and probably all African Americans.

Below: The entire press release from the Delaware County Sheriff's Office.Shrf [email protected] Delaware Ny Us_20120712_114908