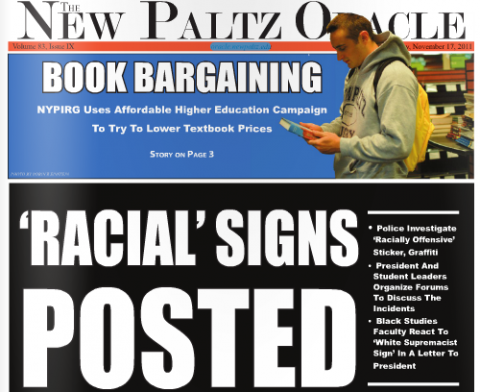 Detail from cover of the November 17, 2011 issue of the New Paltz Oracle, a newspaper run by student journalists at SUNY New Paltz.

For the last two weeks, the SUNY New Paltz community has been embroiled in controversy over a series of racist incidents on campus. Several offensive signs targeting black people have been found on campus, including a sticker bearing the words "Colored Only" on a water fountain, and a scrawl on a poster declaring "Lynch N-----s"* in an elevator.

Since the first sign was found on November 8, the incident has become local and national news, making headlines in the Times Herald-Record, New York Daily News, and the Huffington Post.

But the best coverage of the incident comes from the SUNY New Paltz campus itself, whose student newspapers -- the New Paltz Oracle and the Little Rebellion -- have covered the incident, and the university's response to it, extensively.

The New Paltz Oracle has built an interactive timeline of the incidents and the university's response, with links for more information on each separate event.

The Little Rebellion is using Storify to organize new developments in the story in real time. Here's a link to their Storify page on the incident, where they've published photos of the signs, letters from campus police and administrators, and links to blogs and news accounts discussing the situation.

*Editor's note: We've decided not to print the racial epithet -- although it's vital to the story -- because the word itself is deeply offensive, especially in this context. But you can see the poster in a photo on the Little Rebellion's Storify page.

If there were no photos or other accounts of the offending poster available on the Web, the Watershed Post would have quoted the full text of the poster, including the epithet in question, because it is impossible to convey the story without knowing exactly what was written.