This weekend: Vodou rocks the WKC 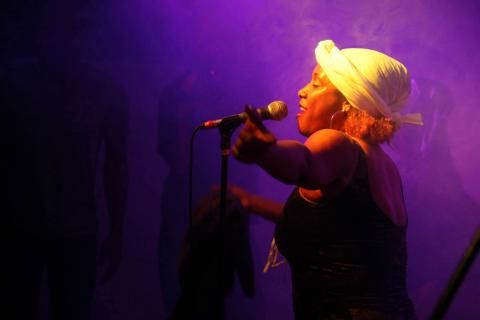 Above: A member of RAM, a Haitian rock/vodou band that will play the West Kortright Centre this Saturday. Photo used with permission.

Last year it was bhangra. This year, it's Haitian mizik rasin music -- traditional vodou folk music mixed with rock 'n roll -- that is coming to the West Kortright Centre's lawn for its annual Gala Under the Stars.

The Meredith arts organization has booked the 14-member band RAM, a legend in Haiti, to play what promises to be a fantastic show. From the WKC's press release:

Just try to sit still for this one! Here comes another great global dance band for the annual summer bash. RAM is a world-famous mizik rasin band. The 14-member combo plays weekly in Port-au-Prince, but will be in the States to perform at big festivals in NYC, Chicago—and The WKC! Featuring vodou drumming, their brew brings to mind the pop music of western Africa with its call and response vocals, delicate chiming guitars, and layers of beautiful percussion. RAM melds riffs from The Clash with blues, funk, and large doses of Haitian compas and other Caribbean sounds.

Funk ambassador in the Catskills: Jon Cleary and the Monster Gentlemen
Got gripes? Send 'em to the Complaints Choir

Thursday: All about pickles

No Michelle Shocked this weekend