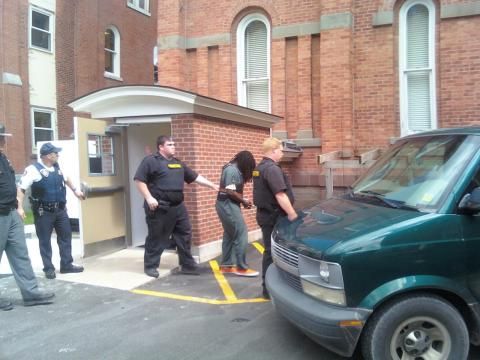 The Delaware County Grand Jury handed down an indictment on Friday, August 26th, charging LeJuan Wainwright with Manslaughter in the First Degree. Delaware County District Attorney Richard Northrup Jr., stated that the case was presented to the grand jury on Friday morning. Wainwright was charged with murder in the second degree in the Village of Walton on August 24th, as a result of the stabbing death of Tyler Warner, age 20, also of Walton.

Wainwright entered the courtroom for the arraignment on Thursday afternoon, flanked by two corrections officers with four court officers providing additional security in the courtroom.  Andrew Puritz, Esq., who is Wainwright’s assigned attorney, entered a “Not Guilty” plea to the manslaughter charge.

When asked about the reduction in charge from murder in the second degree to manslaughter in the first degree, District Attorney Northrup responded, “The case was presented to the Grand Jury of Delaware County and they chose to indict for Manslaughter 1st instead of Murder 2nd.” The Grand Jury consists of 23 members who hear testimony from witnesses to determine whether there is enough information to indict an individual for a crime or return the case to a justice court for a charge less than a felony.

The Court has scheduled Wainwright to go to trial during the trial term beginning January 2, 2012. Carl F. Becker, Delaware County Court Judge, set bail in the amount of $100,000 cash or $200,000 insured bond.  Wainwright is being held at the Delaware County Jail.