New Old House: The rise and rise of Catskill Farms 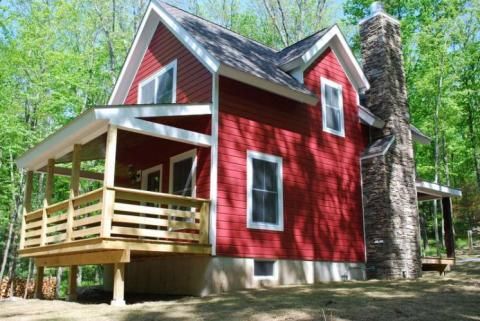 Stop me if you've heard this one: New York City contractor moves to the sticks of Sullivan County, starts a home-building business on a shoestring, and begins buying land to build second homes for vacationing Manhattanites on spec. Just as the business starts making a name for itself, the housing crisis hits, sending prices spiraling downward and flooding the region with for-sale signs.

You'll be forgiven for thinking this story has a tragic ending. On the contrary: Catskill Farms, the brainchild of owner Charles Petersheim, has been a bright little island in a sea of woe. His houses -- shipshape, decked out with wide-plank floors and country porches, and ranging in size from "small" to "tiny" -- are often spoken for before construction has even begun. Recently, Catskill Farms has been expanding beyond Sullivan County's borders, beginning to branch out into the Saugerties and Woodstock area.

The company's been getting a lot of love from the New York press lately. From a glowing profile in the Times Union on Sunday:

Petersheim describes his homes as cottages, farmhouses or just plain shacks. And many of the houses are quite small. A "shack" now on the market in Sullivan County, for example, has just one bedroom and 500 square feet of space. It's selling for $178,000.

Petersheim says he builds smallish homes to keep them relativity affordable. Somewhat inspired by Sarah Susanka's influential book "The Not So Big House," he notes that Catskill Farms began building smaller houses when the age of the McMansion was still in full swing.

Last week, the New York Daily News featured a two-bedroom, $285,000 Catskill Farms cottage as their "Best Place of the Week":

“People are drawn to this area because, of all the Catskills, it remains the most ungentrified,” says Catskill Farms owner Charles Petersheim. “It’s not about the art opening or new sushi place. It’s about the homes.”

But the best place to get the story on the unlikely success of Catskill Farms is from the horse's mouth: Petersheim keeps a zesty, refreshingly irreverent blog, with photos of ongoing construction projects and thoughts on the trials and tribulations of the homebuilding business. Last month, he wrote a long post giving away the recipe for Catskill Farms's secret sauce: listening to the market. It's tougher than it sounds, he writes:

A good entrepreneur is constantly changing tack as the wind directs. Because he wants to succeed, - not because he wants to prove his original hypothesis is correct. Defying the market is more common than you would think - you defy the market because it doesn't jive with your efforts and ideas to date -

you deny the market because it's almost easier to deny a mistake (which will take years to reveal itself) than to find the energy to redirect the ship.

you deny the market because of ego, which clouds the judgment. Ego refuses to accept that something can be improved, or needs to be changed.