Environmental group calls for more (and smarter) development in the Catskills 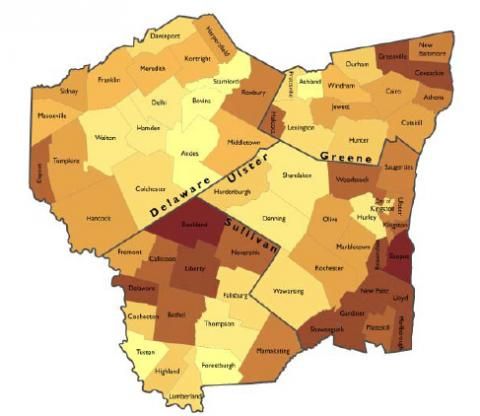 Image: A graphic from the Open Space Institute's recent report on development in the Catskills, showing towns with the most privately-owned open space in darker brown.

A new report from the Open Space Institute, a land acquisition and conservation group based in New York State, says that development in the rural Catskills could quadruple without harming the environment.

You read that right. Here's a key quote:

This study shows that appropriately placed development can coexist with the region's natural resources, bolstering opportunities for reliable, year-round employment. It also indicates that the existing development footprint might quadruple, if appropriately sited, without compromising the economy or ecology of private farm or forestland resources. Planning and coordination are essential to secure a "win-win" in which development and open space complement each other.

The OSI hopes their report, which identifies "preferred growth areas" in Delaware, Greene, Sullivan and Ulster Counties, will be a road map that towns and developers can use to focus their efforts on less environmentally sensitive areas.

An article about the study last week in the Times Herald-Record notes that it's an unusual move for the OSI:

It is a rare, concrete acknowledgment from the environmental community that growth and jobs are needed to stop young families from fleeing the Catskills. The study also highlights room for compromise in the tense relationship between conservation and development.

Unsurprisingly, towns within the New York City watershed area contained about half as much preferred growth area (12 percent) as the towns outside the watershed (23 percent). But even in watershed towns, the areas identified for potential development by the OSI were about four times larger than the existing developed area.

In a recent phone conversation with the Watershed Post, Open Space Institute's CEO, Kim Elliman, spoke frankly about the need for environmental groups, municipalities and developers in the rural Catskills to communicate better about development.

Watershed Post: You're an environmental group calling for more development in some areas, and that's really interesting. So often the conversation between environmentalists and developers is very hostile.

Kim Elliman: In some respects that's tragic, and something we were mindful of. So much of the environmental movement is about "You can't do this here." But I think in the twenty-first century, most environmental groups are mature and thoughtful that there should be development. There has to be development. You have a growing population. And even if you do preferred development -- infill of existing developed areas -- there's still going to be an expanded footprint that goes into green acres, as opposed to brownfield redevelopment. Americans want some backyard.

So development is inevitable. What we'd like to do is promote appropriately sized, scaled and located development. It's an ounce of prevention versus a pound of cure.

WP: You've identified areas where you think development in the Catskills should be focused. How well do you think your recommendations overlap with where towns or developers want to build?

KE: While we look at some local zoning and planning issues, we didn't overlay local planning and zoning plans. It just got to be too complicated. And many of the maps in the towns aren't digitized to the extent that others are, so you couldn't retrieve the data.

Of the land we identified as potential, where we said is more amenable to development, that isn't meant to be determinative. It doesn't dictate what towns should do. We're not trying to usurp local planning. But if you look at Sullivan County, for instance, we're saying Thompson is a place that should get more development. And in fact, that's the town plan, they want more development. They want to recruit more stores and commercial outlets.

As for the broader question you asked -- is this where developers want to go -- that's harder to answer. We have to be mindful that rural New York is shrinking. That may or may not be reversed. Maybe this is all moot, because there's not private capital desire to invest in development in a place like the Catskills.

But to the extent to which we can find and identify areas where there should be less environmental impact, it should make the cost of development lower. And maybe have a less contentious public discussion.

WP: So you're hoping towns and developers will look at this map as a guide when they're deciding where to site things?

KE: Yes. We wanted to get ahead of the debate, so you aren't saying "No, no, no," after a developer has already bought, because there's an important watershed resource there.

That's not to say all development should get a green light. I think we'd probably still oppose casinos.