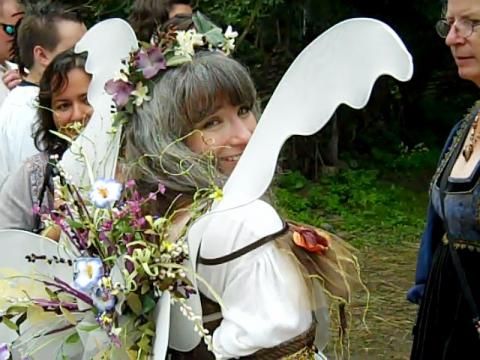 Above: Delhi businessowner Hazel Dunlin, owner of Avalon Moon, dressed as a faerie at the New York Faerie Festival. Last weekend, Watershed Post corresondent Lillian Browne attended the 3rd annual New York Faerie Festival in Windsor, New York, along with a crew of Delaware County residents. She filed this report and the photos that accompany it. -- Julia Reischel

Elves, dryads, faeries and trolls were seen roaming the hills in Windsor this past weekend. Tree sprites dashed about belly dancers and knights jousted after escorting The Faery Queen upon her Unicorn to the Tournament of Champions. Not to be outdone, some very scary-looking monsters held their very own parade during the festivities.

Magic and make-believe were the themes of the 3rd annual New York Faerie Festival - a Midsummer’s Dream held June 24th through June 26th in the Oquaga region of Broome County.

Festival organizer Billy Bardo said the annual event is an opening of the doorway between the land of faeries and the land of people. The landscape was the inspiration for hosting the event in the area, said Bardo, who described the event as family-friendly and full of local vendors and artisans.

“There seems to be a movement for these little magical events," he said. "It’s like a renaissance fair meets Cirque de Solei in the forest. It’s a nice way to have a ‘stay-cation’ locally ... It’s not about what you believe, it’s about what you make believe."

The event was crowded with fantastically-costumed characters flitting about. Attendance at this year’s event has tripled since the first year, according to Bardo.

“Nobody is acting here – it is all for make believe real," he said. "This is serious play.”

The highlight of this year’s festival was the trolls. Bardo pointed out that they are very popular and have not eaten any children, yet.

“It turns out that trolls and children have a lot in common," he said. "A lot of kids that came in here as human are actually trolls in training. A cautionary tale as well: There are real goblins here. It is up to the parents to use their discernment as their children may want to become monsters!” He then added, “Despite the goblin and troll reputation, children just might see past what someone looks like, and learn something about sharing once they look past appearance.”

Hazel Dunlin, owner of Avalon Moon on Main Street in Delhi, attended the event dressed as a magical faerie.

“We have been promoting the event for the past two years by handing out flyers in our store," she said. "We love to attend the event. I love to participate in the festivities, not just observe.”

“It’s a great way to get away from the mundane world we live in," Guy said. "Growing up reading fairy tales and being drawn to all the fairy world has to offer is great. Being able to play a role in at the festival was wonderful. It lets that child inside, who still believes in magic, out.”

“The New York Faerie Festival is very entertaining with all the different people in character and costume," VanArdsdale said. "We all enjoy wearing our 'garb' and escaping our everyday lives. It's a great way to experience the feeling of carefree joy we had when we were young! It's just plain fun.”

The annual event is held the last weekend in June.

Below: Unnamed revelers at the festival. 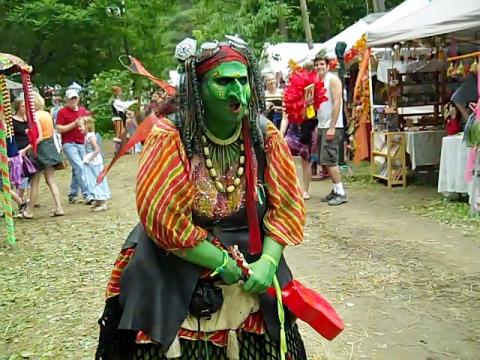