Giant hogweed: Photo from DEC In the midst of a tight new budget and a departmental hiring freeze, the New York State Department of Environmental Conservation has one job for which it is actually hiring: giant hogweed wrangler.

Thanks to funding set aside in the federal stimulus package, Naja Kraus, a botanist in the DEC's New Paltz office, is looking for eight people to work this summer digging up a particularly noxious invasive species in locations across New York.

The job pays $13.27 per hour and involves tending to infestations of giant hogweed in 90 to 130 sites across the central and western New York. Kraus is accepting applications at via email and fax (845-255-1701) until March 1st.

Giant hogweed, which can grow up to 12 feet tall, hasn't been found in the Catskills, Kraus says. (You can see a map of where it has been found below, and on the DEC's website.) 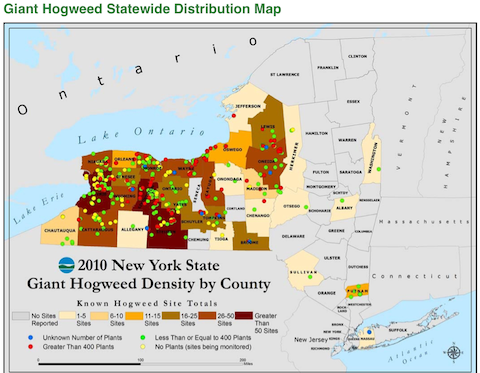 Hogweed's shorter invasive cousin, wild parsnip, is here in droves, however, and if you've tried to dig it up you've probably had a taste of why these plants are so undesirable. Both have sap that reacts with sunlight to produce nasty burns on exposed skin.

An article in the New York State Conservationist, a DEC magazine, explains:

Wild parsnip (Pastinaca sativa) is a member of the carrot family (Apiaceae) which contains about 300 genera and more than 3,000 species, including carrots, parsley, cumin, dill, fennel, celery, Queen Anne's lace, poison hemlock, and their relatives. Some of these species, such as wild parsnip, contain chemicals called furanocoumarins, which, when combined with sunlight on the skin cause phytophotodermatitis (a toxic skin reaction). The chemicals prevent the skin from protecting itself from ultraviolet rays. The result is basically a sunburn. Damage can be as mild as skin discoloration, or as severe as large, extremely painful blisters.

… Like wild parsnip, the sap from giant hogweed combines with sunlight and perspiration to cause phytophotodermatitis. However, the effects caused by giant hogweed can be much worse than those of wild parsnip, with some wounds resembling third-degree burns. Scarring can be permanent and contact with eyes can cause blindness.

Parsnip is already too ubiquitous to control, it seems. But Kraus has been battling the hogweed with some success. She has managed a giant hogweed hotline (845-256-3111) at the DEC for the past few years, using $668,000 in funding from the American Recovery and Reinvestment Act of 2009 to pay her team of crack hogweed weeders to clear hogweed off public and private lands.

Kraus's hogweed “technicians,” as she calls them, are given special training on how to avoid hogweed's sap.

They also wear a head-to-toe array of waterproof equipment.

Hogweed is really big: Photo by Flickr user helena.40proof. “You want to make sure that none of your skin is exposed to the sap,” Kruas says. “We started out wearing raincoats. Now they're wearing Tyvek suits, waterproof boots and gloves, and goggles.”

With a weed like that, you can't be too careful. But, Kraus says that her program is not currently funded past this summer. If the DEC can no longer afford its hogweed team, she says, the weed will quickly spread.

“The worst thing about [losing funding] would be that in the places that we have been controlling, that we're close to eradicating, all the money we've spent will have been in vain,” she says. “If you don't get it eradicated, then you've just slowed the spread.”

“This is a very unique program in that we actually provide help for landowners for free,” she adds. “Anyone that really likes the program should contact our legislators and tell them to pay for it next year.”

For help with identifying giant hogweed and wild parsnip, see this identification guide on the DEC's website.