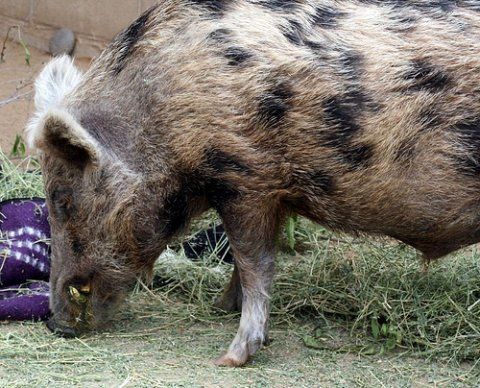 As if flash floods and the emerald ash borer weren't enough to deal with, the Sullivan County Democrat reports that Sullivan County is the next frontier of a national plague of feral swine. The Democrat interviewed the grandson of farmers in Long Eddy, who shot four wild pigs last week:

[J.P. Rosello] was out hunting last November when he saw a 400 pounder running through one of his grandfather’s field. He took a shot using a high-calibre rifle, and although he hit the pig between the eyes, it got up and ran away. But this year, Rosello saw the damaged fields again in a hill overlooking the farm, and decided to take action. Last week he shot four of the animals, the largest weighing 240 pounds. He was able to get them as they came out of the woods.

Wild pigs sound innocuous, but anyone in Texas will tell you they're anything but. Just today, the Texas Department of Agriculture announced that October "Hog Out Month," as in,"Get the Hog Outta Texas!" From the press release:

With as many as 2 million feral hogs causing millions of dollars in urban and rural property damage across the Lone Star State each year, the Texas Department of Agriculture (TDA) today challenged all 254 Texas counties to step up efforts to curb the ongoing problem and decrease the state's feral hog population ...The challenge, which has recruited nearly 60 counties so far, will run through Oct. 31. A grant will be given to the counties with the most hogs removed."

According to the Texas AgriLife Extension Service, which is quoted in the press release, wild pigs are downright scary:

Feral hogs are predators of lambs, kid goats, baby calves, newborn fawns and ground-nesting birds, and compete for food and space with many native species of wildlife. Feral hogs commonly destroy urban yards, parks and golf courses, as well as rangeland, pastures, crops, fencing, wildlife feeders and other property. Additionally, they contribute to E. Coli and other diseases in Texas streams, ponds and watersheds. Vehicle collisions with feral hogs cause an estimated $1,200 in damage per collision, and create safety hazards for those involved.

Of all the domesticated animals, none become more feral more readily, or reproduce more quickly, or survive better in the wild, than the hog. The Great Smoky Mountains National Park, in western North Carolina and eastern Tennessee, has today a population of about 500 wild hogs. Since 1977, hog control officers have removed about 10,000 hogs.

The U.S. Department of Agriculture has a special feral swine program for Texas, and the problem of controlling wild pigs has become a huge industry: A Wild Pig Conference will be held in San Antonio in 2012.

According to the USDA, which has been canvassing Sullivan County for months now trying to detect whether swine have migrated north from Pennsylvania, the pigs think nothing of eating small mammals and even deer. From the Democrat:

SDA Biologist Justin Gansowski said, “New York has been very proactive [in trying to prevent the invasion]. “Pennsylvania has them and we are doing border surveillance to try and figure out how many are here,” Gansowski said. “If they are out [in the wild] and breeding, we could have a serious problem to wildlife and agriculture. “They will eat anything, deer, fawns, corn – you name it, they’ll eat it.

The USDA operates a feral swine tracking map, too. It was last updated in the middle of September, and therefore doesn't seem to be registering Rosello's Long Eddy kills yet. (See the little blue dots? Those are swine sightings.)

But they're definitely here in the Catskills. In order to get an idea of the sheer poundage of pig flesh Rosello killed in Sullivan County last week, check out the photo on Democrat's story.

Photo of a wild pig by Just Chaos, via Flickr.