View from the High Peaks: Getting 'skunked' 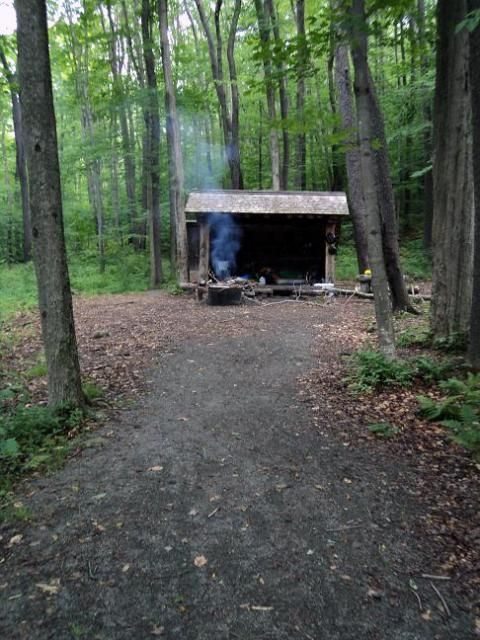 Ever since its inception back in 1993, National Trails Day has been held on the first Saturday in June. If you have never heard of National Trails Day, it is the only nationwide celebration of trails and was inspired by President Ronald Reagan's Commission on Americans Outdoors, which issued a report in 1987 that recommended that all Americans be able to head out their front doors and, within fifteen minutes, be on trails that weave through their neighborhoods and bring them back home without having to retrace their route. Pretty cool, huh?

Thankfully, this recommendation is reality for residents of the Catskill Mountain Region. Whether or not people take advantage of it is a different story, but at least the opportunity is there. To celebrate National Trails Day, I certainly could have been on a trail within fifteen minutes; however, I decided to re-connect with a place I had not been to in about a decade: Trout Pond.Trout Pond

I decided that I wanted to combine two different, yet complimentary, forms of outdoor recreation – hiking and fishing.  There are ample opportunities – especially in the western and southern Catskills – to accomplish this. Trout Pond, nearby Mud Pond, and the beautiful Russell Brook are three such places, all in the Delaware County town of Colchester. Mud Pond (which I did not fish) was stocked this spring with nearly 400 brown and rainbow trout. Trout Pond is not stocked, but it holds our beloved Eastern brook trout - the only native trout to the Catskill Mountain Region. The brook trout population and the loss of its habitat in the northeast are considered one of the telltale signs of environmental degradation. You know -- the infamous “canary in the coal mine."

The trailhead elevation for the blue-blazed Trout Pond Trail is 1,750 feet, and the hike to Trout Pond is easy, only 1.4 miles to the far end of the pond along a gently-climbing old woods road. Tucked away in the far southwestern corner of the Catskill Park, and sandwiched between the Pepacton Reservoir and the Beaverkill, this area of the Catskills seems to get hit repeatedly by drastic and sometimes deadly flash flooding. It was only three years ago this week when eight inches of rain fell in a two-hour span causing four deaths and the complete disappearance of long stretches of Route 206 north of Roscoe.

The hiking trail crosses the Russell Brook, which on this day was a babbling brook and not the raging torrent of three years ago that completely wiped out the bridge just a mile downstream. (That bridge has yet to be replaced.) I followed an unmarked footpath to the base of a true southern Catskill treasure, the 30’-foot-high Russell Brook Falls, and snapped some pictures.Russell Brook Falls

As I moved on along my short hike, and during my 45-minute drive along Routes 28, 30, and finally 206, I observed what many of you surely have on our mountains recently: Brown belts of either leafless or dead sugar maples among green leaves. With the trees leafing out a week or two early this year, maples on the middle and upper slopes and ridgelines were hit by a hard frost on May 11. The lowest slopes stayed warmer on that day, while the highest slopes and summits had yet to leaf out, so the majority of the frost damage hit the middle altitudes.

In what seemed like a matter of minutes, I found myself nestled between Cherry Ridge and Morton Hill, standing on the southern shore of Trout Pond at an altitude of 2,030 feet. I decided to try my luck along the opposite shore from the hiking trail. As I was hiking around the northern end I encountered four guys who had just finished cooking breakfast at camp, in one of the two remote lean-tos there. I asked if they had eaten any trout for breakfast. They had not, and apparently had zero interest in fishing.

Special regulations apply here to maintain and protect this fishery. Anglers can use only artificial lures, there is a 12-inch minimum keep size, and a daily limit of two fish is enforced. I didn’t have to worry about that, since I got what they call “skunked." I fished several spinners for an hour along the remote shore, and then worked the shore near the trail for another hour with no avail.

While it would have been great to fish all day, it was also a great day to hike. And I would have loved to camp out that night in the other lean-to that is perched on the hill above the pond. Too often I find myself planning to simply fish or hike, not both, and certainly not to camp as well. I think when it comes to improving, providing, and promoting outdoor recreation opportunities, municipalities and agencies are somewhat guilty of this planning problem. Why not try to integrate these activities? The fact that they're all available in the same place is precisely what's so special about these Catskill Mountains. Maybe I’ll elaborate next time.

Aaron Bennett is the Regional Director for Catskill Mountainkeeper, serving the high peaks region of the Catskill Mountains, which includes Delaware, Greene, and Ulster counties. His column, View From The High Peaks, appears monthly in the Watershed Post. Drop Aaron a line anytime at [email protected].