Fracking in the forest? 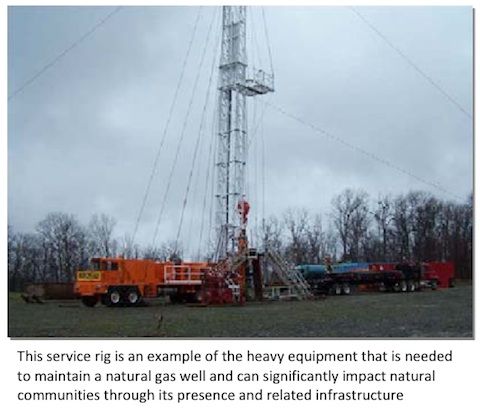 The giant report on state forest management released by the New York Department of Environmental Conservation didn't capture much attention when it was first published on September 3. Neither did the nine public hearings the DEC scheduled around the state to get public input on the plan, the first in the state's history to encompass all of the state's forests at once. And no wonder -- the thing is 338 pages long. (You can read it, in all its lengthy glory, at the bottom of this post, or download it directly from the DEC's website.)

But in the past week, as a public hearing in New Paltz scheduled for Thursday approached, the issue of what exactly the DEC has planned for its state forests, specifically in regard to gas drilling, suddenly blew up.

Yesterday, according to the Daily Freeman, 150 protestors showed up at the New Paltz hearing to oppose the forest plan's approach to fracking. That approach, according to a Facebook post by the protest's organizer, Frack Action, is "drill, baby, drill":

Fracking our State Forests is part of the DEC's new Strategic Forest Management Plan. This plan for our NY State Forest provides info about how they will proceed with leasing for natural gas exploration and use of water for gas extraction once the DEC's SGEIS on fracking is finalized ... Please read pages 231 - 242 in the plan where they state that they will hold off on leasing state forests until after the DEC finalizes SGEIS on fracking but then goes on to include the mechanics of how everything will move forward with leasing, public comments, etc.

The plan would permit up to one wellpad every 80 acres and could result in thousands upon thousands of new wells, pipelines, and access roads.

So what, exactly, does the report say?

Yesterday, Times Herald-Record reporter Adam Bosch picked out the money quote from its hundreds of pages. On page 227, the report states that is is "inclined to consider natural gas developments on state forests:"

Natural gas development has the potential to be a significant and growing source of development on State Forest and private lands due to new technologies that enable industry to effectively extract natural gas from the Marcellus shale play. The following pages contain more detail on these emerging trends, including development of the Marcellus Shale. DEC is inclined to consider natural gas development on State Forests due in part to the fact it is a cleaner burning energy alternative to other fossil fuels such as coal and oil, as shown on the table at right.

That graph, which we've reproduced above, compares the amounts of carbon produced by various fossil fuels as they're burned. It doesn't take into account the carbon produced in the drilling or transportation process. At least one scientist, whom we interviewed back in April, believes that leaky gas pipelines release enough potent greenhouse gases to make natural gas a worse polluter than oil, and possibly as bad as coal.

Some other interesting tidbits from the report:

One thing the report doesn't say is when fracking may or may not happen on state forest lands. At the public hearing in New Paltz yesterday, forester Rob Messenger reassured the crowd of anti-frackers by saying that

...while the plan refers to leases on forest property, no permit will be issued until agency administrators finish developing rules that would be applied for drilling. “We will not do any hydraulic fracturing until those other processes are done,” he said.

And nobody knows when that will be, according to an article in last week's Binghamton Press & Sun-Bulletin:

When will that review be ready? That's anyone's guess.

In the meantime, the DEC is taking public comment on its draft forest management plan until October 29. You can comment by emailing the DEC or mailing them the old-fastioned way at "Strategic Plan for State Forest Management, NYS DEC, 625 Broadway, Albany, NY 12233-4255."