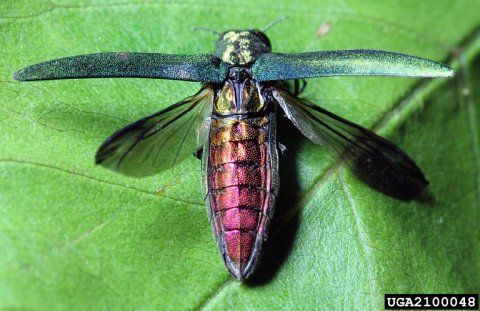 New York State’s newest invasive threat has made its way to the City of Kingston. The Emerald Ash Borer (EAB), a non-native insect that feeds on Ash trees, has been found in the city limits. This is the first known location of the insect within the City of Kingston. However, it is believed the EAB is most likely present in other locations on private land in Kingston near East Kingston.

The Emerald Ash Borer kills the Ash tree from the canopy down, usually within a five-year period. Ash trees comprise approximately 7% of New York State’s forests however are more predominate in urban areas as street trees, due to their ability to withstand urban conditions. This insect most likely traveled to Ulster County through the movement of firewood.

“This bug will most likely kill all of Kingston’s Ash trees which are found along our streets, parkland and infrastructure and we must prepare for the cost of removal and replanting along with protecting life and property,” said Mayor James M. Sottile. Sottile is also directing city staff to look for grant opportunities to help Kingston respond to these difficult circumstances, which will allow for the City to reduce the impact on city taxpayers.

“The City will be working with the Kingston Tree Commission, Kingston Conservation Advisory Council, the NYS DEC, Cornell Cooperative Extension, the USDA, and many other local, state and federal agencies in order to create a community preparedness plan during the winter of 2011,” said Steve Noble.

One of the first steps is to identify Kingston’s Ash tree population, especially street trees, as they pose the most risk to infrastructure and the quality of life in neighborhoods. The City has launched an online Ash tree reporting site that will allow homeowners to learn about Ash trees while also providing a forum for community members to report Ash trees along their streets. Additionally, the City is looking for volunteers to conduct an Ash tree inventory later this fall and early winter. Currently, the City does not have an up to date tree inventory.