The barbershop takes the cake 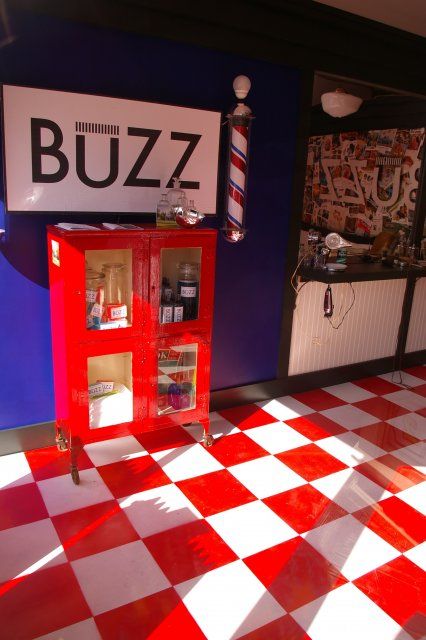 The Re-Store Design Challenge ended its month of design competition on Saturday at an awards gala in Roxbury. Of the three fantasy store contestants -- an "air emporium" peddling bottled air, an antiques-oriented woodshop, and a barbershop plastered with ads from vintage Playboy magazines -- the barbershop, dubbed "Buzz," took the crown. (As it happened, that entrant was the brainchild of Andrew Williams, the architect who dreamed up the entire Re-Store contest in the first place. See our interview with him here.)

Roxbury's Main Street Re-Stores were all the "Buzz"

With a budget of only $1,000 and a team of talented volunteers, designers Donald Hill, Sean Scherer and Andrew Williams took on the Re-Store Design Challenge this summer and turned Roxbury's Main Street into a hot spot of creative enterprise in the former Enderlin Gallery properties.

Hill's team created Marcel DuChamp's Air Emporium, where the fragrant and intriguing aromas of gay Paree could be sampled. Scherer's store, Woodshop, spotlighted an integral Catskills resource in all its forms, from mallets and tables to lithographs of trees. Andrew Williams created a retro barbershop, Buzz, with a back story of its creation by one Dieter Schlongenschtupper, who created "good cuts for good people" back in the late 20s with his new-fangled "buzzing" clippers. Williams' barbershop was outfitted with an antique barber's chair once used by long-time Roxbury barber Bob Cole.

On Saturday, Sept. 18, a panel of judges convened on Roxbury's Main Street to visit the stores and judge them on creativity, execution, and participation of their Roxbury high school student teammate. Their assessments were weighted with the votes of "shoppers" and the winner was: Buzz

Williams has high hopes that the "buzz" generated by Re-Store this year will continue in another local village next summer, saying "One of the most interesting things about the project was that it forced us all to set our creativity loose. The Re-Stores were meant to inspire and to bring life to a street that could use a energy boost. Even during construction we had dozens of people stopping in or walking by asking us what was going on."

Williams' Re-Store team included artist Grant Collier, builder John Gohorel, and student Jacob Liberatore (sporting a fresh buzz cut at the awards event), who was awarded a scholarship to further his own educational aspirations. Liberatore will be headed for college next fall and plans to study engineering. The other students, Nevada Schuman and Paulina Cowan received stipends for their participation.

In the meantime, Roxbury has grown so fond of its intriguing new "window dressing" that the renovations will remain in place (although not "open") for passersby to enjoy. "They're a reminder of what a creative entrepreneur could do with an actual business in Roxbury," said Williams, adding, "The town is ready, and the foot traffic appeared in droves once we gave people a reason to visit Main Street.

With the second expansion of The Roxbury Motel and the growing presence of restaurants like Public, Cassie's and East Branch, I think Re-Store really 'nailed' a vision of Roxbury's Main Street as a viable retail opportunity. Now let's hope someone really buys into that idea. That's what the Re-Store project was really all about.

Photo of Buzz by Julia Reischel.